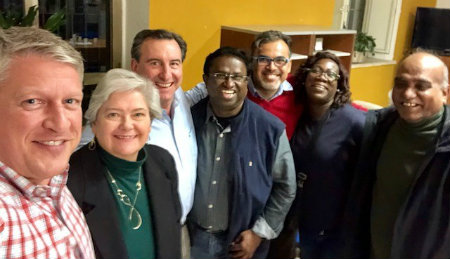 One of SU’s own is playing a key role in plotting out the future of Jesuit education.

Joe Orlando, director of the Center for Jesuit Education, was in Rome last month as a member of an eight-person North American delegation that is working to advance Jesuit higher education internationally. The delegation representing the U.S. and Canada joined with about 40 other colleagues from Jesuit institutions around the world to prepare for the formal launch this summer of the International Association of Jesuit Universities (IAJU).

Under the guidance of Michael Garanzini, secretary for higher education for the Society of Jesus, the international association is being formed to promote networks of collaboration between and among institution of higher education. It brings together lay and Jesuit faculty and administrators in the areas of training, leadership development, and research and advocacy on issues of concern to the Society and to its members. (Father Garanzini previously was president of Loyola University Chicago.)

Orlando is serving on the association’s steering committee, one of seven that also include committees on Leadership Formation; Civic and Political Leadership Formation; Environmental and Economic Justice; Education for Marginalized and Refugees; Interaction with Religious Pluralism; and Peace and Reconciliation.

“It was humbling to be part of the gathering with such inspiring colleagues, lay and Jesuit, from all corners of the globe, and from such a wide range of Jesuit institutions in Latin America, Europe, Africa, India and the Asia Pacific regions,” said Orlando.

The official launch of IAJU will take place in July at Deusto University in Bilbao, Spain.