After a 29-game regular season that included a hard-fought 16-game Western Athletic Conference schedule, the Seattle University men's and women's basketball teams are just a few wins away from earning a berth into their respective NCAA Division I Basketball Tournaments. Each team needs to win the 2014 WAC Basketball Tournament at the Orleans Arena in Las Vegas, Nev., in order to receive the conference's automatic bid into the national postseason tournament.

The women's basketball team, led by WAC Player of the Year Kacie Sowell, won their quarterfinal match-up against Kansas City last night by a score of 81-76. Seeded third for the tournament, the women will now face the number 2-seeded Bakersfield in the tournament semifinals at 2:30 p.m. on Friday, March 14. 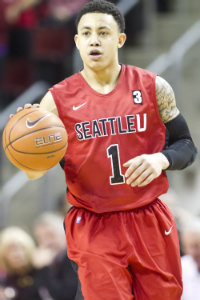 The men's basketball team (with highly decorated Isiah Umipig, pictured here) finished in a tie for seventh place in the WAC regular season standings and is the seventh seed in the men's tournament. The Redhawks will face second seed New Mexico State, the two-time defending WAC Men's Basketball Tournament champion, today (Thursday, March 13) at 8:30 p.m. Over the past two years, the Redhawks and Aggies have played close, memorable games, and this should be no exception with so much on the line.

Should the men advance to the semifinals, they will play Friday at 8:30 p.m. and face either Chicago State or Bakersfield at 8:30 p.m. The championship games for both tournaments take place Saturday, March 15, with the women's title game at 1 p.m. and the men's championship contest at 7 p.m.; both will be televised nationally by ESPNU.

All Seattle U men's basketball tournament games will be broadcast live on 770 AM KTTH, with Dave Grosby and Gary Hill Jr. calling the action, while Brian Abker will be the play-by-play broadcaster for the Redhawk women's basketball tournament games on GoSeattleU.com. The quarterfinals and semifinals will also be streamed live on www.wacsports.tv with the purchase of a subscription needed to access the online video streams.