Yet another challenge that goes along with homelessness: Not having a safe, nurturing place to heal after being discharged from the hospital.

Seattle University's College of Nursing is doing something about this problem. In partnership with the Seattle Mennonite Church (SMC), faculty and students with the college launched an initiative in May that gives homeless people in Lake City a place to recuperate after leaving an urgent care facility while helping them improve their lives going forward.

Funded by a grant from the Sinegal Initiative to Address Homelessness in King County, the pilot program, "JustHealth: promoting justice through health care," has helped eight homeless people to regain their health and transition to more stable situations.

Lauren Lawson, instructor, has been integrally involved in the community-academic partnership with the SMC and their community ministry in Lake City.  At the drop-in center, called God's Lil Acre, Lawson along with both undergraduate and graduate students have provided nursing assessment and referral services to individuals at God's Lil Acre.

"What I had experienced in the few years that I had been working with the Mennonites at their drop-in center is that when individuals were hospitalized or in the ER they were discharged back to the street," says Lawson. "It was a common problem brought up by the community of people experiencing homelessness. They were very disturbed by it. The recovery was really poor."

From her literature review Lawson discovered that she was observing a national problem and she learned that one way to deal with it was through programs called medical respites. 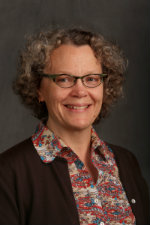 To confirm the need for recuperative care among homeless people in Lake City, Lawson and colleague Bonnie Bowie, associate professor, conducted community-based participatory research and formed a community advisory board that included members of the area's homeless community. The resulting evidence from a community assessment informed the community advisory board of the need for recuperative care and through collaboration with a number of community members and organizations JustHealth was launched. It is just one of two programs of its kind in the city-the other is run by Harborview.

JustHealth, Lawson says, is about "providing a safe place for people to heal and receive wrap-around services."

Most of the referrals come from the Northwest Hospital. When the patients leave an acute care facility, they are provided lodging at the Rodeway Inn. They receive skilled nursing services  from CareAge Home Health. The patients' health needs are monitored even after they leave the respite site and other partners work with them to help them get off the streets.

SU nursing graduate Natalie Sloan ('12), worked at the drop-in clinic at God's Lil Acres as a student, is the program coordinator for JustHealth. Key to her role is case management-serving as the point of contact for the clients and ensuring they are getting the services they need, both while and after they recuperate. "Natalie has been instrumental to the initial success of JustHealth," says Lawson. "It's been really amazing to watch her go from being a student to coordinator of a program." 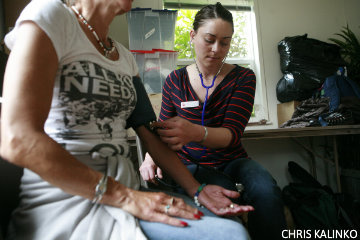 Few would be shocked to learn that homelessness is linked to health problems, and yet the magnitude of this correlation may be surprising. Homeless gentlemen at 58, for instance, are four times more likely to die of chronic illnesses, such as hypertension and diabetes, than a housed person of the same age is.

And yet a health crisis can be a moment of opportunity for a homeless person, says Lawson. "You're catching people at a vulnerable time when they're probably more engaged in making changes in their lives, so they're more interested in how to find housing, get treatment for addictions, improve their health, deal with their legal problems and reconnect with their families."

These are the sorts of transformations that JustHealth is seeking to bring about.

Lawson talks about a patient who recently was hospitalized for an abscess, a common problem for IV drug users. "While in the hospital, this person decided to stop using drugs, really wanted to make changes in his life."

In addition to helping to facilitate individual success stories, respite care has other societal benefits, not least cutting down on recidivism and, thus, health care costs. "One of the concepts behind respite care is how to decrease re-hospitalizations through care transitions as identified in the ACA (Affordable Care Act)," says Lawson. "(Respite care helps to) assure that when people are discharged from urgent care, they are not returning to the ER within 30 days." 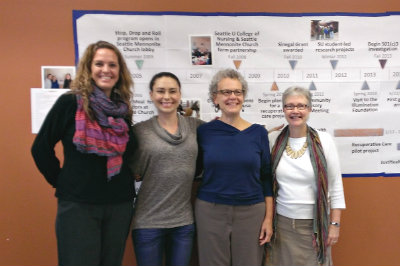 With this in mind, respite care programs such as JustHealth are expected to increase in the coming years.

Now that the pilot phase is in process, Lawson is working with the community advisory board  to establish JustHealth as a 501(c)(3) nonprofit, develop sustainable funding and build its capacity. "There are plans to progress," says Lawson-for instance, the organization may have its own building for lodging, rather than utilizing a nearby motel. But, she adds, JustHealth "will stay within the same model of community collaboration."

A big part of that model, she says, is ensuring that JustHealth remains community-driven. "The advisory board sees itself as doing this kind of 'walk alongside people,' because that's the Seattle Mennonite's ministry as well as ours here at Seattle U. Our concept of social justice has been a wonderful overlap."