KeyBank has made a $105,000 commitment to the Seattle University Youth Initiative. The funding will help build the initiative's educational pipeline from Washington Middle School through Garfield High School.

"It was a joy to present the first installment of KeyBank's gift of $105,000 (on July 21) to the Seattle University Youth Initiative," wrote Carol Nelson (Albers, '78 and '84), Pacific Region Sales Executive and Seattle Market President at KeyBank, and member of SU's Board of Trustees.

Launched in 2011 as the largest community engagement project in the history of Seattle U, the Youth Initiative is long-term commitment uniting students, faculty and staff with schools and more than 30 community partners to improve the academic achievement of 1,000 youth from low-income backgrounds living in the greater Yesler Terrace neighborhood. 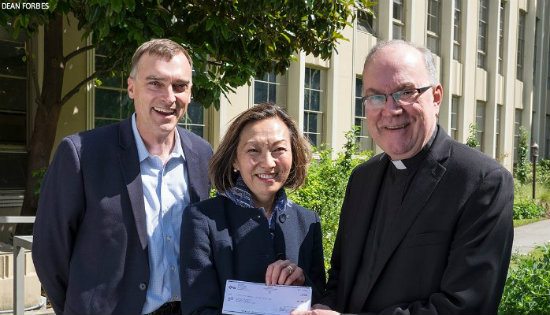 Carol Nelson of KeyBank (center) with Kent Koth of the Center for Community Engagement and President Stephen Sundborg, S.J.

The funding of $35,000 a year for three years from KeyBank will support a full-time SU staff position at Washington Middle School and an AmeriCorps position at Garfield High School.

"We appreciate KeyBank's investment in Seattle U's partnership with our local schools, community leaders and youth," said Kent Koth, executive director of the Center for Community Engagement. "KeyBank's support enables Seattle U and its partners to expand educational programming to further empower youth to attain success in school and in life. We are particularly excited about the support to deepen partnerships focusing on middle and high school students."