Jesuit in a Zen way 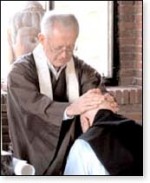 S.J., (Kennedy Rōshi), who is both a Jesuit priest and a Sōtō Zen Master, came to Seattle University for the Second Annual Sōtō Zen Seminar on Oct. 30. Ordained a Jesuit priest in Japan in 1965, he studied with Yamada Koun in Japan in the 1970s. Kennedy, left, was installed as a Zen teacher of the White Plum Asanga lineage in 1991 and was given the title Rōshi in 1997. Kennedy studied Zen with Yamada Rōshi in Kamakura, Japan, Maezumi Rōshi in Los Angeles and Bernard Glassman Rōshi in New York. Glassman Rōshi installed Kennedy as sensei (teacher) in 1991 and conferred inka (his final seal of approval) in 1997, making him a rōshi (master). Kennedy is currently an elder in the Zen Peacemaker Order founded by Glassman in 1996. He teaches theology at Saint Peter's College in Jersey City, N.J. and sits with his Zen students daily at the Morning Star Zendo in Jersey City and with students in other zendos located throughout the tri-state area.