Ed Reed reflects on his travel with men's basketball team

While the trip included three exhibition games against European club teams - three friendlies in which the Redhawks went undefeated - the experience was about more than basketball.

Assistant Professor Ed Reed of SU's Mateo Ricci College accompanied the team on the trip, which was also part of a credited summer course titled "A Tale of Two Cities: London and Paris."

The players, coaching staff and Reed visited several historic sites. They rode through the suburbs and walked through the cities of two of the most popular tourist destinations in the world.

It was an international bonding experience for a team that may be as geographically diverse as any in NCAA Division 1. Eight SU players are from the U.S., two are from Italy, one is from Croatia, one is from Slovenia, one is from Canada, and 7-foot-3 sophomore center Aaron Menzies is from England. For Menzies, the trip was a homecoming.

Shortly after returning to the U.S., Reed spoke about the tour. 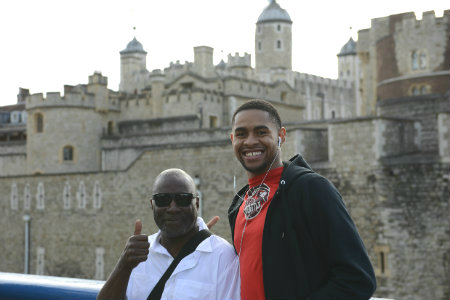 Q: What was the goal of the European trip?

Ed Reed:  I looked at it like an immersion…You're not only participating as athletes, you're going in and out of museums, you're eating at local (restaurants), you're interacting with the people. You're in another world.

This is the stuff you read about in books, but now you're seeing it in person. All of the stuff we've been talking about, now you can see. You're standing on the grounds of history.

In a real sense, it was a holistic education.

Q: What did you learn?

Ed Reed:  There's a big world out there, Amaar. We live in a country where we're less than five percent of the world's population. But when you go to a place like London, where every nationality in the world lives, you see the diversity. It's pretty amazing.

Seeing how that played out in public is quite interesting. As a scholar, I'm constantly looking at individual behavior, group interaction; I'm looking at police, I'm looking at poverty. There were times in London when we noticed that we hadn't seen any police. We didn't see any homeless people. I got to look at things from all these different angles to understand the social reality.

Q: What were some highlights of the trip off the basketball court?

Ed Reed:  The Tower of London and the Eiffel Tower (in Paris). Both left everyone talking, sharing and reflecting. It was very powerful for the players and coaches.

Videos of the men's basketball team's trip to Europe can be found at, Part 1, Part 2 and Part 3.

(The author, Amaar Abdul-Nasir, is a former student of Ed Reed.)