I’m organizing an event on campus and wondered if it would be possible to serve a roasted pig?

Q:  I’m organizing an event on campus and wondered if it would be possible to serve a roasted pig? 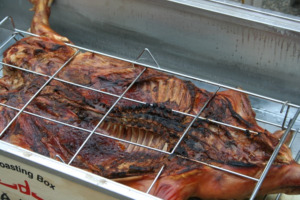 A:  Why, yes, as it turns out, SU’s food service provider, Bon Appétit, has recently invested in a special box for roasting pigs. Executive Chef Jim Cooley says the box is capable of cooking up to a 70-pound pig in about 4-5 hours. He has used it a few times already and reports that it works great.

As for the cost of having a pig roasted for your event, Cooley estimates it would run about $450 for a 50-pound suckling pig, which feeds 25-35 people. “A pig will lose almost 50% in shrinkage when cooked,” he says.

In terms of presentation, Cooley says he is partial to the classic apple-in-the mouth. "A hat and a cigar is also sort of an interesting look. It all depends on your crowd."