How much money did SU's students raise at the 2014 Dance Marathon?

Q: How much money did SU's students raise at the 2014 Dance Marathon? 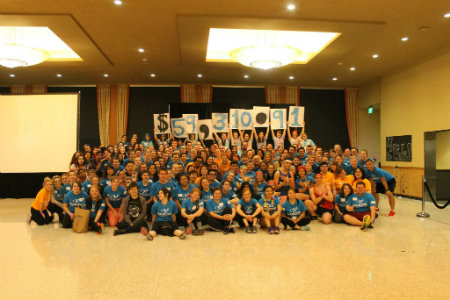 A: About 200 SU students participated in the 2014 Dance Marathon. The event began at 10 a.m. on Saturday, Feb. 22, and came to a close at 2 a.m. on Sunday. The dancers had set out to raise $50,000, $8,000 more than last year's record-setting total. When the music stopped, nearly $60,000 was raised, making it not only the most successful in SU history but the largest dance marathon in the west, according to Children's Miracle Network.

One hundred percent of the proceeds go to Seattle Children's Hospital to be used for families who otherwise could not afford the critical care their kids need. "We believe that no family should feel alone in their fight against a pediatric illness, and no child should be kept from the medical care they need to live a fulfilled life because of money," the group's mission statement reads, in part.

The dancers were entertained by DJ and the Ramblin' Years band. They heard touching stories from Seattle Children's Hospital families and were visited by Seattle Mayor Ed Murray.

In just seven years, the SU Dance Marathon has brought in more than $200,000 for Children's Hospital. For more information, visit Dance Marathon.