How much financial support for students was raised at this year's Costco Scholarship Fund Breakfast?

Q: How much financial support for students was raised at this year's Costco Scholarship Fund Breakfast?

A:  Held Sept. 14 in Bellevue, the 17th-annual Costco Scholarship Fund Breakfast raised $4.1 million in support, which will be shared equally by students at Seattle University and the University of Washington. In 2000, Costco joined forces with SU and UW to create scholarships for highly qualified underrepresented students who wish to attend these universities. Since then, more than 600 Seattle University students have proudly carried the distinction of being named Costco Scholars. 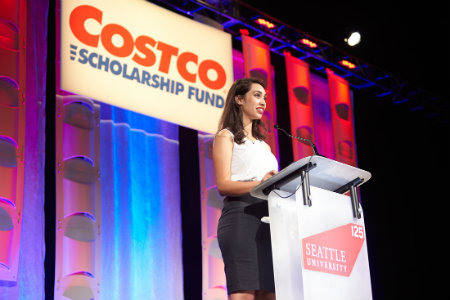 Rianne Spath, a senior majoring in electrical and computer engineering (left) served as emcee for the event. (That name might sound familiar as Spath was recently featured on KOMO News along with Associate Professor Henry Louie for their work to bring electricity to rural areas of Zambia.)

In his remarks, President Stephen Sundborg, S.J., said, "As much as any new building, new program or new initiative to come online in the past several years at Seattle U, the Costco Scholarship has changed us. It's brought to our campus hundreds of men women and women men and counting who contribute a richness to the tapestry community of our university. It's made us a stronger, and more vibrant academically community. All of us at Seattle University-all of us-have benefited greatly from the Costco."