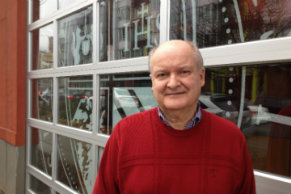 We will soon be able to refer to our colleague John Dougherty as a bona fide hall of famer. On Sunday, Feb. 8, the athletic development officer will be inducted into the Seattle U Athletics Hall of Fame with five other individuals and one team.

Going back to his college days, Dougherty has been supporting Seattle University's student-athletes in one way or another. On his way to graduating from SU in 1966 with a degree in education, Dougherty served as student manager for the men's basketball and baseball teams. Back then the position was comparable to a modern-day assistant coach. Dougherty arranged the team's travels and took care of the money and equipment.

In return, he received a full scholarship, which for him was everything. "My parents didn't have the money to allow (my siblings and me) to go on to college," he says. "I've been grateful my entire life because my education here has opened up many doors for me."

Dougherty spent most of his career in the corporate world. All the while he found ways to give back to Seattle U. Early on he served as president of the athletics booster club. He later served as a member of the Alumni Board of Governors. While working for Vacation Internationale, Dougherty secured numerous donations to support SU.

Then, in 2007, just as the university was returning to Division I, Dougherty was asked to come back to his alma mater, this time as an employee. And as he had so many times, before, Dougherty answered the call. "I almost feel like I've gone full circle here with the university," he says.

Dougherty talks about his current role as more of a vocation than a job. A passionate believer in Seattle University, its mission and its student-athletes, he relishes the chance to reach out and invite others to support the cause. "I've been very grateful for the opportunity of asking people again to be involved with Seattle University athletics in a greater way."

Dougherty follows his sister, Sue Ursino, into SU's Hall of Fame. Ursino, '74, had a successful golfing career while at SU, although the university did not field a women's golf team during that time. Dougherty and Ursino will be the first brother-sister combination to be included the Athletics Hall of Fame (which by the way is physically located in the Connolly Center).

When he isn't working in his yard or around the house, Dougherty more often than not can be found attending an event, athletic or otherwise, at the university. He says he wouldn't have it any other way. "As my brother says, 'John, do they really pay you to do this?'"