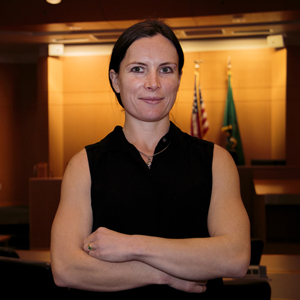 McCarthy, a 1L, said her interest in law evolved from her work in Costa Rica as an undergraduate student. She saw herself practicing environmental law and policy someday, possibly working to protect endangered species. Following her interest in using the law as an advocacy tool, McCarthy started working as a legal assistant at the Northwest Justice Project (NJP) in 2009. She enjoyed helping low-income clients get access to legal services, but her role felt limited. A law degree seemed like the next step to boost her career. But before she followed her dream to law school, she focused on another passion: rowing.

Since losing her sight, McCarthy has used sports to relate to sighted peers. Participating in sports was her way to cope with being blind and "show that having a disability doesn't have to prevent one from doing the things they want to do and the things they love."

McCarthy ran track in high school and wanted to continue fostering her love of sports in college, so she joined the rowing club. And it turned out she was good at it. Really good. In 2012, McCarthy left her job at NJP and moved to Oklahoma (where the Paralympic training center is located) to focus all of her energy on rowing. She competed internationally in 2013 and 2015, and earned fifth place at the 2017 World Championship.

Though her Paralympic dreams weren't totally behind her, she was ready turn her attention back to her career. In order to have a bigger impact for her clients, McCarthy trained as a mediator to help people solve disputes without taking legal action. She then joined the Dispute Resolution Center of King County (DRC), a nonprofit that provides mediation and conflict resolution services for individuals, businesses, and families in King County. "Mediation is simply an alternative to the legal process for parties interested in resolving their disputes outside of a courtroom," she said.

But the draw to attend law school didn't subside. She finally applied out of a desire to grow her career and seek upward movement professionally. More importantly, she felt that a law degree would help her maximize her impact on her mediation work.

When she was researching law schools, Seattle U quickly rose to the top of her list. McCarthy was attracted to the school's reputation as a social justice institution and felt like the mission-centered approach to education paired well with her interests. "I could really connect with its focus. Social justice and serving populations that are in need of legal assistance is a mission I could get behind," McCarthy said.

McCarthy was impressed with the school's programs and activities, including support services offered to students through the Academic Resource Center. "I appreciated feeling like the school wanted me to be here and they wanted me to succeed here. It was just such a welcoming environment."

And, she says, the school took extra steps to accommodate her needs and ensure her success. "The dean of students worked on making sure I got all my textbooks in an electronic format and making sure that I had a note taker to take notes for me in class if I needed, and made sure I had all the technology I needed. I found that process to be very smooth. They've been very helpful," said McCarthy.

As an evening student, McCarthy appreciates the option to attend law school part-time so she can maintain her job at DRC during the day. Though she's only a few months into her first year of law school, she says her experience is already helping prepare her for her work as a mediator. "Coursework is very theoretical but there's a lot of opportunities to put theory into practice."

While she's not sure what she'll end up doing after graduation, she's considering working in an area of law that involves restorative justice practice. "I am very interested in restorative practices where it is a more holistic approach to punishment or an alternative dispute resolution system." She's particularly interested in working with young people because of their future potential. "I feel like that's a very impressionable group and it's a very valuable place to give them the resources they need to improve in the long term. So that just seems like a great place to start."

This story originally appeared at School of Law.