A few hours after returning to campus from Rome, President Stephen Sundborg, S.J., was only beginning to process the unusual chain of events that placed him in the company of the leader of the Catholic Church.

It all started with what seemed like a simple enough question when one of SU's trustees asked his mother what she wanted for Christmas.

"I would like to meet the pope," she answered. So much for an espresso maker.

Nevertheless, the son dutifully set out to make his mother's wish come true. After trying a few different avenues and coming up empty, he turned to Fr. Sundborg to see if the president might use his Ignatian mojo to help arrange a meeting with the most famous Jesuit in the world.

"What I thought was that I've never been asked that before," says Fr. Sundborg, "and I don't know if that's possible."

But he gave it a shot. He wrote to the head of the Jesuits, Superior General Adolfo Nicolás, S.J., and what do you know, a few months later, there was an answer. The pope, Fr. Nicolás reported, not only responded but responded "unambiguously YES."

And so it was that a group of about a dozen visitors, including the mother who made the request, her son, other family members, the rector of SU's Jesuit community, Tom Lucas, S.J., and President Sundborg found themselves on a shuttle bus to the Vatican to meet Pope Francis at 10:30 a.m. on Monday, Nov. 3.

"Closer and closer to the inner sanctum"

The meeting was to take place in the Apostolic Palace or Papal Palace where the pope typically meets with dignitaries. To reach their destination, the group relied on the same man who had been so critical in making the visit possible.

"We picked up the Superior General at the Jesuit headquarters," says Fr. Sundborg. "Father Nicolás was absolutely eager to help with this. He directed the driver on where to go. He was recognized by security and waved on through. There was no need to show our passports."

Just getting to the palace was an experience unto itself. The visitors wended their way through a series of arches, courtyards, corridors and ramps. Along the way, escorted by the colorfully attired Swiss Guards and chamberlains, the guests ogled the magnificent centuries-old works of art displayed all around them.

"It's overwhelming to have that experience of being whisked closer and closer into the inner sanctum of the Vatican," says Fr. Sundborg. "Just the process of getting there is so unusual; it's like nothing you've ever done in your life."

And yet for the president and his traveling companions, this day of once-in-a-lifetime experiences was just starting.

After reaching the Apostolic Palace, the group was led into a room about twice the size of an SU classroom. And there he was, standing alone, the man who went by the name Jorge Mario Bergoglio until a conclave of cardinals did what many considered unthinkable and elected a Jesuit pope on March 13, 2013.

A day before the visit, Fathers Sundborg and Lucas had joined 200,000 faithful in St. Peter's Square for the pope's weekly Angelus blessing. Now here they were face to face with the man to whom the throngs had clamored.

Francis warmly greeted his visitors and invited them to join him seated in an oval of chairs. Father Sundborg played the role of facilitator. He explained to the pope who the guests were and invited the family members to ask questions or make comments. President Sundborg translated their words into Italian, Pope Francis replied in either Italian or Spanish and Superior General Nicolás translated the responses back to English. 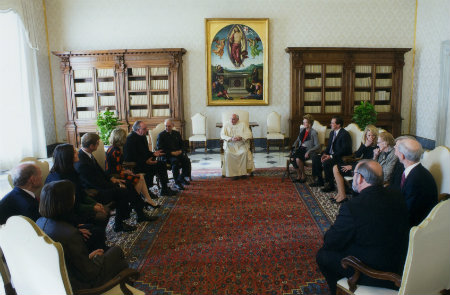 When it was his turn, the president asked if the pope had a message for Seattle University's students. Rather than reel off a pat answer, Francis had a couple questions of his own about the students of SU. After learning more from the president, he had two messages.

"And second, he spoke of 'incarnation.' That you have to enter into the concreteness, the existential reality of your students' lives."

The pope also spoke of the Church as a field hospital. "His view is that the whole world is at war, with conflict and polarization," says Fr. Sundborg. "It's not just some countries in war. There are people being wounded or hurt or discarded. The Church needs to be like a field hospital and help heal the wounds of people. You don't ask in a field hospital what's the cholesterol level of the person-you help them with their wounds."

The gifts of self-deprecation and levity for which the pontiff has become known were also in evidence. When Fr. Lucas mentioned he was superior of 24 Jesuits at SU, Francis gave a tongue-in-cheek response that could be translated to something along the lines of "Poor you!"

Going in, the group was expecting the meeting to last about 15 minutes. After about a half hour President Sundborg grew concerned that they were taking up too much time. "I was thinking, we should set this man free." The pope responded that he was available for a few more minutes and would be happy to continue the visit. There was no objection on the guests' part, and when all was said and done, they had spent 45 minutes in the pope's presence.

Before bidding them adieu, the pope made a point of sending them off with five words or phrases. He returned to witness, incarnation and field hospital, and also spoke of closeness and mercy-two key themes of his papacy.

This, Fr. Sundborg says, is a deeply felt reality for Francis. "He has a very strong sense of God blessing him and protecting him and so what he's doing as pope is being supported and really guided by God's protection of him and guidance of him."

After giving each of his guests a set of rosary beads, the pope stood by the door and individually said goodbye to all of the visitors.

"None of us could believe that we were the only thing that counted for him for that period of time," says Fr. Sundborg.

Highlight of a lifetime

So what do you say after spending the better part of an hour with a man upon whom the eyes of the world are fixed-this larger than life figure who has captured the imagination of Catholics and non-Catholics alike, this rock star who's graced the covers of Rolling Stone  and, of course, Time  magazine as its "2013 Person of the Year?"

As the awe-struck Seattle visitors boarded their bus and left the Vatican, Father Sundborg articulated what was likely on everyone's minds, "Hey everybody, check one off the bucket list!"

But there was so much more to it than that. Back in his office three days after the visit, Fr. Sundborg was clearly radiating a profound sense of wonder and gratitude.

"It's a very unusual experience to be ushered into the inner heart of the Catholic Church and find a pope who is gentle, soft, humorous, kindly and very attentive and listening-this Gospel-like person of great mercy. That's very wonderful and consoling for me as a Jesuit and a priest.

"I would have to say that the experience was not only a gift to this family but was a very moving personal gift to me, and I can genuinely say it feels like the highlight of my life."

Watch for more coverage of the visit with the pope in the winter issue of Seattle Magazine.