The fittingly named field has long been home to champions, most recently with our men's and women's soccer teams winning WAC titles in the fall. And now, the turf is a champion in its own right. 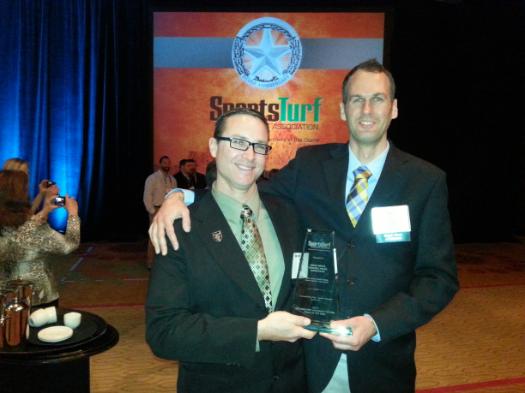 Championship Field has earned "Field of the Year" honors in the collegiate soccer category. Accepting the award, which was presented at the Sports Turf Managers Association conference in San Antonio last month, were Athletic Fields Specialist Kevin White and Gardener Peter Larson (pictured l. to r.).

White attributes a great deal of the field's success to the collaborative relationship the gardeners have with the coaches and teams.

"I am extremely grateful to our grounds staff and everything they do to provide us with one of the best soccer fields in the country," says head women's soccer coach Julie Woodward. "Kevin and Peter are not only pretty amazing people but they are such diligent, hard-working professionals. They take an immense amount of pride in the work that they do and we are blessed to have them working at Seattle University. They have provided us with one of the best soccer venues around."

Head men's soccer coach Pete Fewing agrees. "(Grounds Manager) Shannon (Britton), Kevin, Pete and their staff are very dedicated and talented. A field is only as good as those who care for it, their passion for making Championship Field is evident in the hours and effort they put in, and the quality of our grass. We truly enjoying working closely with Shannon, Kevin and Pete together to maintain the field. For us they are on the TEAM.

"If Kevin says we need to stay off the field or train in a certain area, then that is what we do. All our student-athletes and coaches, are grateful for their work."

And this is really what it's all about for Larson. "The award is nice," he says, "but we get more satisfaction out of seeing both the men's and women's teams enjoy using the field. That's when we know we've done a good job.

"The icing on the cake," he adds, "is seeing professional teams that come through Seattle request to train on the field. The field is just a beautiful setting, right on the back side of downtown. I think people are starting to realize that nationally and regionally."

It also says a lot that Championship Field was selected best of the year by a peer group of sports turf managers who know their stuff. They considered such criteria as labor hours invested, operations budget, square footage, personnel, equipment and hours of use. While the association doesn't provide specific feedback on applications, one of Championship Field's strong suits for White is the extensive use it supports.

"This field takes a lot of use-I think more than people realize. Both our men's and women's soccer teams play their games on the field and it's primarily their practice field, too. It's not common for a university to have one field for two teams. I think that's what sets us apart from other fields."

"I would say the fact that being pesticide-free was a huge determining factor," adds Larson, a 10-year SU veteran who is the primary steward of Championship Field. "A lot of people we met at the awards banquet were shocked that we were pesticide-free. They were curious if that was by choice or a campus regulation, and we were adamant that it was by choice. It's our mission within the whole grounds department."

The commitment to pesticide-free maintenance adds some complexities to the maintenance equation. As does the field's composition. "It's a sand-based field," explains White, "which is a completely engineered system. It's really not supportive of a whole lot of microbial life. So where we have to be really careful is balancing our inputs-like controlling how much fertilizer we put out, so we're not growing too much, because when you grow too much that's when the disease pressure gets higher."

This vigilance is coupled with a lot of hard work. "I think the success we've had is we always try to stay on top of aerification and seeding," says White who's been at SU for five years and oversees Championship Field and SU Park. "We're always out there doing something that's beneficial. With the amount of use (the field gets), if we weren't out there, then I think the quality of the field would suffer."

Then there's weeds. "Since we're pesticide-free, we can't put an herbicide out to control that," says White. So the gardeners hand-pull the weeds by cutting out plugs, discarding the weed and then filling the hole with a plug they take from a sideline area that's out of play.

One of the biggest challenges the gardeners face is the turf that's closest to the perimeter of the track that encircles the field. When runners tread on that portion of the field a depression results, which makes it very difficult to maintain. White and Larson suggest that if runners come off the track, they move further into the field as it's easier to maintain those areas.

It's yet another detail to which Larson and White are attentive as part of their ongoing quest to provide the optimal playing surface for SU's soccer teams. "We have one of the best grounds crews and stadium fields in the country," says Fewing. "No question at all."