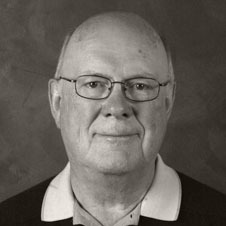 It was announced in April that Frank Case, S.J., Jesuit assistant to the School of Law and the Albers School of Business and Economics, has been named vice president for mission at Gonzaga University. Before heading to Spokane to assume his new post in June, Father Case spent some time reflecting on what he’s done so far and what lies ahead.

On the path his life has taken him:

There is an old saying we learned early in the course of our Jesuit formation, “God writes straight with crooked lines.” As things developed during my formation years, I was destined to specialize in the field of economics with an eye towards a faculty position at one of our Jesuit universities, Seattle University or Gonzaga University. The Albers School of Business here at Seattle University was kind enough to take me on when I completed my studies. I found great fulfillment in my relatively short career on the economics faculty, particularly in my role of teaching. God had further plans, however, and, as many here on campus know, after six years I was named rector of the SU Jesuit Community, and from there went on to become provincial of the Oregon Province and then regional assistant for the United States and general secretary at  our Roman Curia under Fr. Peter-Hans Kolvenbach, S.J. Then three years ago, after 22 years away, I returned to Seattle University and was eventually assigned to the Division of Mission and Ministry as liaison to the business and law Schools. This was a crooked path in its own right; but I could see the hand of God giving direction throughout.

On what it was like to return to Seattle University after so many years away:
These two years at Seattle University have been a blessing for me. Besides the great blessing of living with my Jesuit brothers in the Arrupe Community, it has been wonderful renewing old friendships among the Albers faculty, and making new friends both in Albers and in the School of Law. Furthermore, after so many years abroad, I have enjoyed living close to several family members once again. Speaking of family members, when I go to Gonzaga my brother, Dick, and I will be serving in the same city for the first time in his 48 years and my 55 years in the Society of Jesus. We are both looking forward to that.

There has been another powerful blessing for me in returning to Seattle University. When I left in the mid 1980s we Jesuits were just beginning a program of working more closely with our colleagues or partners in ministry here at SU. To see how much this modest project has grown, both in numbers, and particularly in its depth of buy-in to the university’s mission, has given me great consolation, happiness and assurance of SU’s solid future as a Jesuit institution. From a university where the lay people were collaborating with us Jesuits, the institution has become a university where we Jesuits are collaborating with you, our lay colleagues and friends.  I must say I will miss this, but am sure I will find the same spirit and reality at Gonzaga.

On how his latest stay at SU has prepared him for his new role at Gonzaga:

Several months ago, I was asked to apply for the position of Vice President for Mission at Gonzaga University. (I have been on their Board of Directors for the past two years plus.) Certainly a key part of Gonzaga’s interest in my application lay in my experience with the Province and the universal Society of Jesus. Presumably, in their eyes they thought I would bring a vision from on high and from afar. That was fine; but what experience did I have with the direct supervision and support of the Catholic, Jesuit, and humanistic mission of an actual university? Did I have any experience of university administration? Rome did not provide for this eventuality. These past two years here at Seattle University have afforded me a wonderful bit of experience on the ground, so to speak. I feel well enough prepared at least to begin this new work, even though I will have lots to learn on the job. I am most grateful to Fr. Peter Ely and the entire Mission and Ministry team for their including me and inspiring me during this time. I can only trust that God will write something straight with the crooked line I lived these past 25 years for the benefit of the our sister institution beyond the Cascade Curtain.