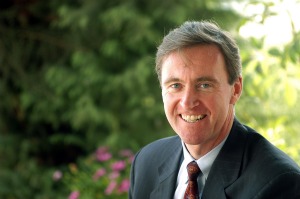 What if America’s businesses operated according to Ignatian principles? So asks John Levesque, in the August edition of Seattle Business, inspired by his time on SU’s campus as a student in our Master of Fine Arts program.

Levesque’s article features Chris Lowney, left, who left the Jesuits to work at a J.P. Morgan and later wrote Heroic Leadership: Best Practices from a 450-Year-Old Company that Changed the World. Published in 2003, the book delves into lessons from St. Ignatius and the early Jesuits that are applicable to the business world.

Lowney was the featured speaker at the National Jesuit Student Leadership Conference that SU hosted in 2008. A month before coming to campus, he spoke about his book in an interview with the university’s faculty and staff newsletter, explaining: “In a world that sometimes seems to believe that the only way to become successful is to shun principle, [the Jesuits’] approach to living and working shows how we might be principled people and be successful in our efforts.”

Today, Lowney is president of Jesuit Commons, an organization working to bring the riches of Jesuit education to the poorest and most marginalized people of the world, particularly those living in refugee camps.

Levesque himself sings the praises of Jesuit education in his Seattle Business article, writing, “What has struck me about my exposure to Jesuit education is that no one has tried to proselytize me. Or sell me basketball tickets. Instead, I’ve been encouraged to be myself, always with an eye toward intellectual engagement centered on leadership, social justice and service to others.”