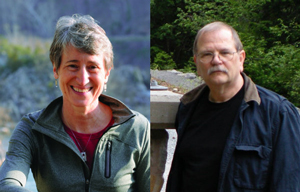 Sally Jewell and Samuel Green will serve as commencement speakers at Seattle University’s undergraduate and graduate ceremonies, respectively, on Sunday, June 17. Each will also receive an honorary doctorate from the university.

Jewell is recognized as a leader in sustainability. Following a distinguished career in the private sector, including 13 years at Recreational Equipment Incorporated (REI)—five as COO and eight as CEO—she was confirmed as United States Secretary of the Interior in 2013. As secretary, Jewell worked tirelessly on a number of conservation and environmental protection initiatives, expanding access to parks and ensuring access to public lands for future generations. She has received numerous awards, including the National Audubon Society’s Rachel Carson Award, the Woodrow Wilson Center’s Award for Public Service and the University of Washington’s 2016 Alumni Lifetime Achievement Award.

Samuel Green was appointed the first Poet Laureate of Washington in 2007 by then-Governor Christine Gregoire. He has authored 11 poetry collections and has been published in hundreds of journals. In 2008 Green received the Washington State Book Award for Poetry for his poetry collection, The Grace of Necessity, and the following year was awarded a National Endowment for the Arts Fellowship in Poetry. Green has been generous in sharing his expertise and insights with aspiring writers at numerous schools, colleges and universities, including serving several terms as the Distinguished Visiting Northwest Writer at Seattle University.