Catching up with Quentin Dupont 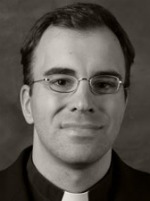 Quentin Dupont, S.J., is at Seattle University this year as part of his formation as a Jesuit. He recently answered some questions about what he’s doing here, what comes next for him and more…

On what he is doing at Seattle University:

I am teaching at the Albers School of Business and Economics, and working with Ignatian programs in Campus Ministry. I am at Seattle University for a one-year appointment, and will go to study theology at Boston College next year, in order to be ordained a priest in a few years.

On the similarities between his native city of Lille, France, and Seattle:

I grew up in Northern France, near a city called Lille, which resembles Seattle in many ways. Lille is a city of modest size (around 200,000 inhabitants), but forms the fourth largest metropolitan area in France taking into account its surroundings (over 1,000,000 people all together). The weather in Lille is very similar to what I have experienced here: lots of cloudy days, and lots of drizzle! Last, but not least, the people of Lille, like the people of Seattle, are extremely welcoming. A French song says that people from the North of the country “have in their heart the sun that they do not have outside.” Likewise, I have been overwhelmed by the hospitality and kindness of people here in Seattle, and especially at Seattle University.

On how he decided to enter the Society of Jesus:

In the course of my undergraduate studies, I spent a year at Santa Clara University, where I really “met” the Jesuits for the first time. About a year after I graduated, I entered the Society of Jesus in the California Province, where my religious vocation had really taken its shape and roots too. Since joining the Jesuits I have been able to experience the grace of God in very many ways, and my time here at Seattle U has certainly been a highlight of my Jesuit Life. Already when I interviewed for the position, and throughout the year, I have noticed the importance of the Jesuit character and the Ignatian mission of the university throughout campus. I am struck by how deeply this character and the mission have been cared for by faculty and staff across the university. I think that students see this and benefit much from it.

On his experience at SU so far:

It is sometimes difficult to be assigned to a place for one year, and indeed I wish I could stay for a while longer. But this has not felt like “just one year.” I have a home here, thanks to my Jesuit brothers at the Arrupe Community, to the faculty and staff at the Albers School, in Campus Ministry, and all through campus, and thanks to our characteristically engaged and eager students at Seattle U.