Power of the natural world is celebrated in newly arrived sculpture

When you first lay eyes on it, you're struck by its sheer size. From a distance, it resembles a gigantic piece of driftwood. Upon closer inspection, you see the subtle work of an artist. It is gently sculpted here, seemingly left untouched there, and in many places you just can't tell whether its shape and texture are the work of nature, human hands or both. But this is not a half-finished project. Its complicated contours were deliberately crafted. Or left alone. 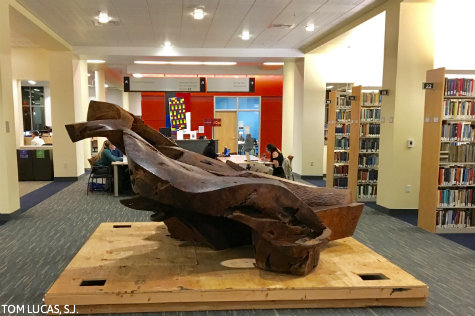 "Bird in Flight" is the latest work of art to join Seattle University's impressive collection. Carved from a fallen part of a redwood tree, the burl arrived on Lemieux Library's third floor near the Circulation Desk earlier this month. The piece was donated by Weyerhaeuser as it moves its headquarters from Federal Way to Seattle.

The artist behind the piece is the late J.B. Blunk (1926-2002), a renowned West Coast sculptor and ceramicist whose monumental works are displayed at Stanford University, SFMOMA, the Oakland Museum of California, the Smithsonian Institution, Lawrence Hall of Science at UC Berkeley and UC Santa Cruz.

There's a certain sense of mysticism in Blunk's pieces. He believed in taking objects found in nature and essentially following their lead. "The core of all my sculpture," the artist himself once explained to Woodwork Magazine, "is a theme, the soul of the piece...the object itself, evokes a theme. In these cases, I do very little to change it. One could say the theme is recognized."

As you walk around "Bird in Flight," the aviary features that Blunk came to see in the object become apparent. And when you take a few steps back, the piece actually seems to be levitating.

Of course that doesn't mean it's light as a feather. To extract "Bird in Flight" from the truck in which it arrived, the 4,500-pound sculpture had to be lifted by crane. To enter the library, the doors of the building's west entry had to be removed. And to get it to its final destination amidst the stacks of Lemieux, no fewer than eight people-burl bearers, you might say-helped roll it in on four dollies. It was an effort as gargantuan as the piece itself.

Chiefly responsible for ensuring a smooth receipt of this gift were Tom Lucas, S.J., professor of Art and Art history and rector of the Arrupe Jesuit Community, who curates SU's burgeoning art collection and Steve De Bruhl, senior project manager in Facilities Services, who oversaw the logistical side of the move. Or as Pat Howell, S.J., Distinguished Professor in the Institute for Catholic Thought and Culture, who was on hand for the installation, aptly observed: "The Weyerhaeuser bird landed in the SU library! Kerplop. Steve De Bruhl oversaw the project. Tom Lucas, S.J., made all the artistic arrangements. Jan Hartley, university librarian, provided the nest." 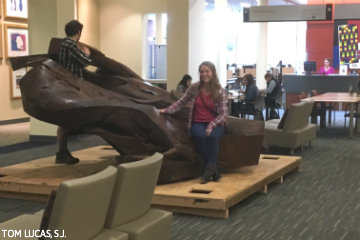 Of "Bird in Flight," Father Lucas says, "Blunk's work provides an early, poetic example of how the environmental movement engaged the arts in the 1960s to 80s. His raw materials, 'found objects,' were the ancient burled stumps of fallen or logged redwoods that project both massive strength and surprising delicacy. He worked the burls with every kind of tool, from chainsaws and axes to chisels and fine grit sandpaper. His work reveals both the power and intricacy of the natural world."

Faculty, staff and students are invited to visit "Bird in Flight" on the third floor of Lemieux Library. As pictured here, patrons are also encouraged to touch the piece and even sit upon it if they'd like.