(This is the final profile of the three new Jesuits who have joined Seattle University this academic year. You can scroll down to read the previous two.)

At various stages in his life, the Jesuits were a presence in Matthew Pyrc’s life. Eventually, he decided to join them.

After earning his undergraduate degree at Franciscan University, Pyrc joined the Franciscans. “I did my theology studies with them, but we actually studied at a Jesuit school (Regis College at the University of Toronto).” 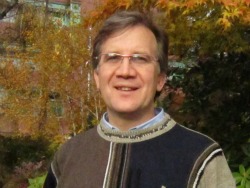 Pyrc was in his final semester when he decided to leave. He returned to his native Michigan and, after finishing the theology degree on his own—with some financial help from the Jesuits—he worked with juvenile delinquents in a group home. Pyrc (“pier-urch”) then moved to Spokane, Wash., where his brother lives. He worked for 10 years with at-risk youth, first providing employment training and later running an intervention program to help keep students from dropping out of high school.

Around this time, he and his friend took a vacation to Africa. “It was in the back of a pickup truck on a safari that we were reflecting on what a life-changing trip this was and talking about what we would do next.

“I was thinking Peace Corps at the time, but what I wanted was an experience of spirituality and community, and as wonderful as the Peace Corps is, I wasn’t going to find those (there). So I started talking with the Jesuits, and the rest is history.”

Of course, that history continues to be written. Pyrc, who entered the Jesuits in 2006, arrived at SU this summer after completing his theology studies at the Jesuit School of Theology at Berkeley. He’ll be here two to three years for the regency phase of his formation. Pyrc is part of the Campus Ministry team, working with students on social justice ministry, immersion trips and other service projects, as well as providing spiritual direction.

His early impressions of SU? “People have been very welcoming. The students are fun and full of energy, and the Sunday night liturgies are just amazing. There’s a lot of life on this campus.”

In his free time, Pyrc likes bicycling and spinning class. He’s recently gotten into photography and is sitting in on a digital photography class taught by Claire Garoutte of the Fine Arts faculty.

Is the Seattle rain bothering him? “Not yet,” he says, with laugh, adding, “When I was in Berkeley, I did an immersion program in Colombia. So I experienced the rainy season there, but, there, it was more of a torrential downpour, so it’s very different from the rain we have here.”