A milestone will be marked this June when Imam Abdullah Polovina becomes the first Muslim student to graduate from Seattle University's School of Theology and Ministry. 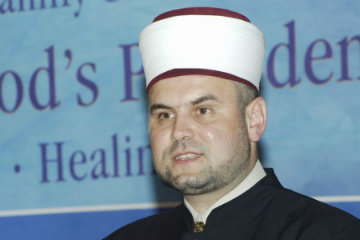 Polovina, right, learned about the school while serving as an imam in Seattle. Currently working at Bosniaks Educational and Cultural Organization-BECO in Portland, Ore., he officially completed the Master of Arts in Transformational Leadership (MATL) program last month. All that's left is the pomp and circumstance of commencement day.

Mark Markuly, dean of the school, says Polovina's accomplishment fits with the school's mission. "The School of Theology and Ministry has strived for several years to figure out a way to become a learning space for people of any religious tradition to explore the most important things about being human and how we can build a more just and humane world. The unavoidable demands of cultures that are awash in religious pluralism demand these kinds of re-thinking of schools of theology. It is very complicated, but also very exciting."

Polovina acknowledges some initial trepidation about carrying the mantle of being the first Muslim student to enroll in SU's School of Theology and Ministry. "On some level, I felt a kind of pressure to present myself in that way, my belief system and my religion."

Those feelings of anxiety would quickly dissipate. "I felt like I was at home, like it was one big, nice, healthy family," he says. "I think there's a huge level of trust that they've built at the school."

At first glance it may appear an odd fit-even the beginning of a joke, as in: "An imam walks into a Jesuit, Catholic school of theology and ministry…"

And yet, Markuly says that engaging, if not embracing other faith traditions, is embedded in the school's Jesuit Catholic identity. "The school's commitment to interreligious dialogue is grounded in a tradition of Christian hospitality as well as a historical evolution within the Catholic Church," he says, pointing to a number of Vatican II documents that support active engagement with other faiths, decades of interreligious dialogue at the highest levels of the Vatican, and very specific commitments at the last two international Jesuit discernment gatherings called General Congregations.

Polovina says the MATL program has helped shape him as a leader in his own faith while awakening him to new possibilities as an agent for interfaith dialogue and understanding. For Polovina, the importance of interreligious dialogue is not some sort of abstract, far-away concept-it's an imperative he knows all too well, having endured the genocidal war in his native country of Bosnia in the 1990s. Polovina brought that experience with him when he arrived in Seattle in 2001 to work as an Imam at Islamic Community of Bosniaks in Washington.

"Imam Polovina has a profoundly gentle soul, despite encountering and enduring the worst kind of human violence when Serbian nationalists tried to exterminate his people," says Markuly.  "He has had an impact on those in his classes, bringing the noble Islamic tradition out of the abstract nature of the way the media tends to treat the religious tradition into the concrete reality of an inspiring person of faith."

Polovina, who calls Markuly a catalyst and channel for interreligious dialogue, says his experience in the MATL program was as much a spiritual as an intellectual journey. "Coming out of the hardships of the war, (my time at the School of Theology) was a kind of healing process. (The school) invites people to think of ourselves as brothers and sisters in humanity…I'm grateful for the transforming feeling I have gotten from the (MATL) program."