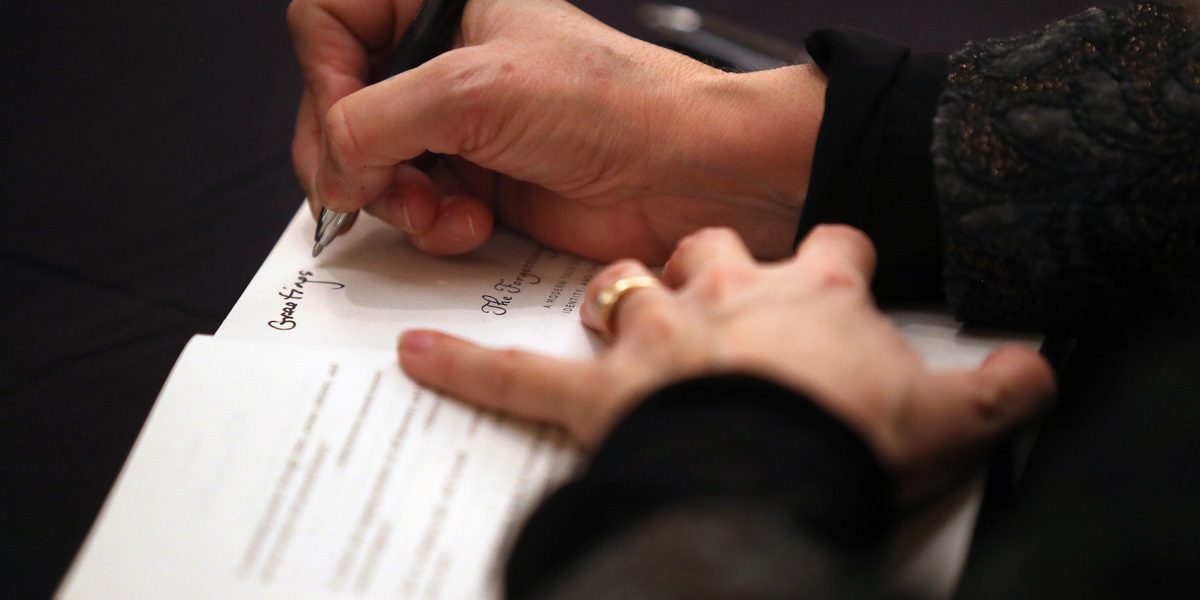 Looking for a reason to attend Seattle University's Search for Meaning Book Festival? There are more than 50 as some of the region's and the nation's most influential authors and scholars prepare to descend on SU's campus for the seventh annual festival on Saturday, Feb. 28.

The book festival was launched by the School of Theology and Ministry in 2009 under the leadership of Dean Mark Markuly. Striking a chord immediately, the event has grown exponentially since its inception, with attendance doubling or even tripling some years.

Last year for the first time, the festival was presented by SU, as a whole, in recognition of its status as a signature university event. Markuly and his colleagues continue to be intimately involved in the festival, especially in handling the authors. More than 350 have visited campus through this event in the past six years.

On a recent afternoon the dean is paging through the list of the 55-plus authors slated to attend the festival and enthusiastically highlighting many along the way, starting with the two keynotes Krista Tippett and Paul Vallely.

An award-winning journalist and former diplomat, Tippett hosts the National Public Radio show, "On Being," which takes up the questions "at the center of human life: What does it mean to be human, and how do we want to live?" She has a particularly large following in the northwest region, with 45,000 to 50,000 people downloading each podcast.

"(Tippett) is essentially doing nationally as a way of life what we're trying to do with the book festival," Markuly says, "explore what it means to be a serious human being trying to live a good life at this moment in history."

Vallely wrote the first journalistic biography of Pope Francis, going to Argentina shortly after Jorge Bergoglio was elevated to the top position in the Catholic Church.

"More biographies of Francis have come out since Vallely wrote his," says Markuly, "but thus far the other biographies have been about nine parts piety, one part serious journalistic weighing of a complex personality. Vallely really tries to understand both the light and dark in the soul of Jorge Bergoglio, getting at the complexity of man who has lived in difficult, violent times, but has also been touched at the center of his being by a merciful presence. Vallely really has the best biography, in my opinion, for understanding this Argentinian pope who has captured the imagination of an entire world."

The roster of other authors, which includes some SU faculty and staff, is a who's who of the literary and scholarly world. The gamut could not run any longer in terms of what topics they take up and how they present it, and yet boundlessly diverse as their works and voices may be, the participating authors are all searching for what it means to be human.

Markuly explains the book festival's resonance with so many by placing it in the context of today's society. "There was a time in American history when there were only a couple of meaning-making paths you had to choose from, and people were pretty much prescribed to go down a certain path at birth. But beginning in the '70s it started fragmenting and different paths proliferated throughout the '80s and '90s. And then you bring the Internet into it and suddenly the whole world's meaning systems are on our doorsteps. It's become much more complicated to talk about the most precious things that we hold to as human beings. This event is trying to give us an opportunity to deepen our sense of consciousness about what we're doing with what one Search for Meaning keynoter, Mary Oliver, has referred to as our 'one wild and precious life.'"

Thanks to the generosity of this year's title sponsors, Robert and Laura Ellen Muglia, the university is able to offer Search for Meaning at a modest cost--$10 per person. Stay tuned for an announcement in the next few days on how SU faculty, staff and students can secure complimentary tickets to the festival.