A:  A large crowd of faculty, staff and students gathered in Campion Ballroom on Dec. 4 for a community briefing on Seattle University's new brand strategy and concept.

President Stephen Sundborg, S.J., and Vice President for Communications Scott McClellan kicked off the briefing by providing context. Father Sundborg said the initiative was important for enrolling new students, supporting the upcoming capital campaign, galvanizing the university's alumni and truly being perceived as Seattle's university. "This is the right time for us to be doing this," he said.

McClellan said the initiative was intended to "awaken the sleeping giant that is Seattle University. We have a great story to tell. We all want more people to hear it." He added that the development of the brand was "a very data-driven process," involving numerous focus groups with students, faculty, staff, alumni and supporters, as well as phone surveys with more than 700 prospective undergraduate and graduate students.

From there, 160over90, the agency with which SU is partnering on the initiative, took over and shared the findings from what they call the "discovery" phase. While their research yielded a storehouse of valuable information, the agency used their limited time at the briefing to focus on the most important takeaways. For instance, the findings affirmed that many of SU's core attributes-such as its commitment to social justice, diversity, inclusiveness, creativity, and forward-thinking education-are the same qualities being sought by a significant population of prospective students. 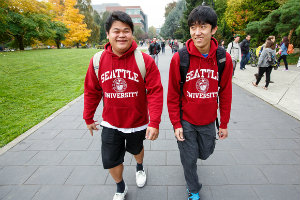 Other findings showed that while SU's students are receiving the kind of academic experience that is expected from the Jesuit educational experience, externally speaking, there is a lack of awareness on the meaning and impact of Jesuit education.

In the agency's view, these and other findings suggest that the university has a chance to make a really strong first impression with many new populations, including prospective students as well as potential community partners and donors. They presented the following as key opportunities for SU: capitalize on our strength as a forward-looking university and our location in an urban hub; bring more awareness to our rigorous academic program; differentiate ourselves as a Jesuit university; and own Seattle.

After presenting the research, 160over90 walked the attendees through the brand strategy and concept, making it clear that "proofs of concept" they shared were sample ideas of how the new approach could look in practice, and that specific executions had yet to be developed. The real executions will be prioritized and developed over time as the initiative now moves into the "build" phase.

The conceptual ideas presented included samples of print collateral such as view books for prospective undergraduates; marketing materials for graduate students; digital content targeted to students, alumni and potential donors; outdoor signs; and even some apparel. They provided a number of intriguing options for highlighting the university's commitment to social justice, as well as the Youth Initiative, and for better engaging the university's graduates.

During the Q&A segment, campus community members responded positively to the brand concept with some faculty, staff and students sharing ideas to consider as it is implemented.

McClellan said the feedback will help inform the executions, and that the Brand Leadership Group looked forward to the continued participation of students, faculty and staff as the initiative moves forward. He also underscored that the strategy and concept are just the beginning of what will be a multi-year effort expected to include, among other facets, an ongoing visibility campaign.

The next steps in the immediate future include establishing brand guidelines in addition to beginning to develop priority executions. Brand camps are being planned for winter quarter so that the faculty, staff and students who will be most directly involved with SU's brand can immerse themselves in the guidelines and strategies in order to help carry the effort forward.