A Seattle U delegation attends a special gathering with Catholic youths and the pope.

Seattle University was well represented at World Youth Day, which took place July 25-31 in Krakow, Poland. A 14-person delegation attended the international celebration of Catholic youths as well the MAGIS 2016 gathering that preceded it. 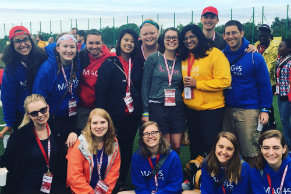 Reflecting on the pilgrimage, Lopez shared the following:

"MAGIS and WYD was an amazing experience! One highlight of our experience was the MAGIS Experiments. During our time at MAGIS, our pilgrims were in small groups of about 15-20 pilgrims from around the world who worked, prayed and lived together for a week in host locations all over Poland and the Czech Republic (Lithuania was also a host, but our students were not placed there). These intimate settings allowed our students to really engage in intercultural dialogue, reflection and prayer in meaningful ways with other pilgrims.

"I personally made connections with many people from other countries during my time in MAGIS that I hope will continue in years to come. It was also wonderful to be with Pope Francis in Krakow and pray with him and hear his reflections and hopes for young people. I was also personally very touched by the generosity and kindness of the people of Poland, who opened their hearts and homes, churches and schools to host our pilgrims. I believe that our Seattle University pilgrims have learned a lot on this immersion (about themselves, about their faith, about leadership and about the world), and they will bring all this back to enrich Seattle University's community in the next academic year. We are very grateful for all those who supported us in our preparation and through funding to make this pilgrimage possible."

Here are some frequently asked questions on World Youth Day and MAGIS.

A: WYD is a week-long festival at which thousands of youth from around the world gather with the Pope to celebrate the Catholic faith. WYD is a unique way to deepen one's faith and grow closer to Christ, through prayer, worship, sharing and catechesis (religious education).

Q: How long has WYD been in existence?

A: While the first official WYD was celebrated throughout the world in 1986, the festival began in its current form as an international gathering the following year when Buenos Aires, Argentina, hosted a million pilgrims. Krakow was the 13th city to host the international gathering. The previous host site was Rio de Janeiro, Brazil (2013). So far, Denver is the sole U.S. city to have hosted WYD (1993). Click here for more information on the history of WYD.

A: Held for 10 days prior to WYD, MAGIS 2016 is an opportunity for attendees (a.k.a. "pilgrims") from Jesuit institutions to participate in Ignatian pastoral experiences. MAGIS was started in 1997 before the World Youth Day held in Paris, France. The program offers an opportunity for pilgrims to grow as individuals, in their relationships with God and others, and through intercultural dialogue. More than 2,200 participants attended MAGIS 2016.

Q: Who is welcome at WYD?

A: All are welcome, although attendees typically range in age from 16 to 35.

Fun fact: According to Wikipedia, the 1995 World Youth Day closing Mass in the Philippines set what was then a world record for the largest number of people gathered for a single religious event (with five million attendees).

Learn more at Krakow 2016 and World Youth Day. Additional coverage can be found at Catholic Sun, AJCU and Magis 2016.