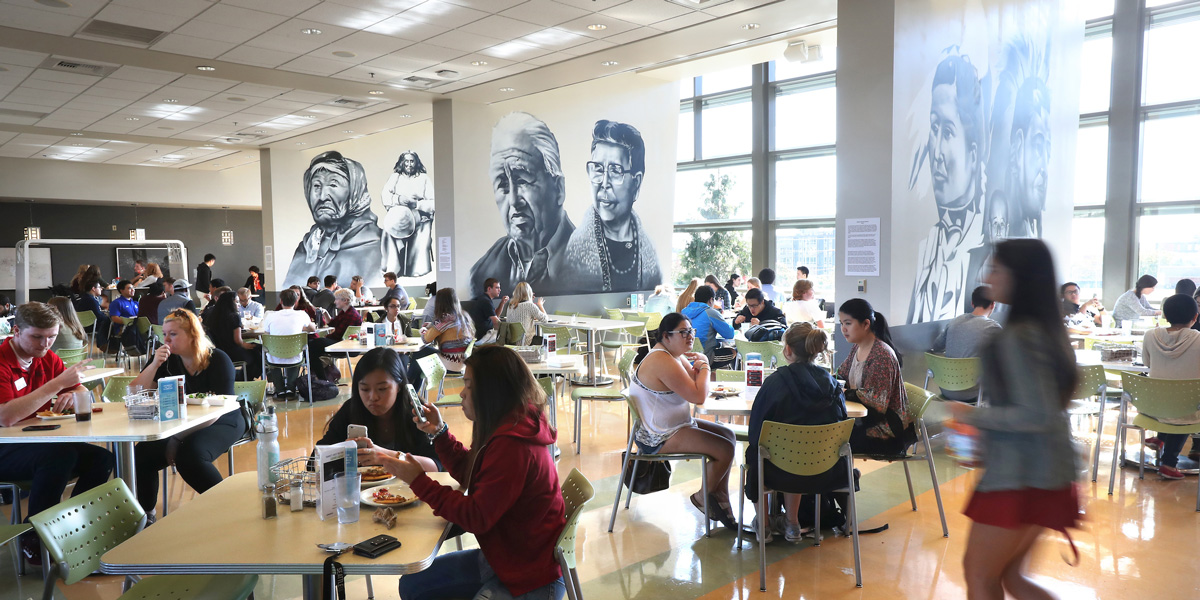 New murals in the Student Center celebrate Native American leaders of the Northwest.

It took artist Andrew Morrison just two weeks to paint the larger-than-life portraits capturing the cultural touchstones of Northwest Native Americans on the walls of the Student Center's Cherry Street Market. The three commanding murals, done in grey and white, evoke a continuum of time, telling the story of the coastal Salish people through carefully chosen historical and modern imagery.

"It's a reminder that we are still here, that we share these lands and spaces," says Associate Professor Christina Roberts, one of the project organizers. "Through these murals we honor a history that is past and take a collective step into the future by strengthening existing relationships and building new ones." 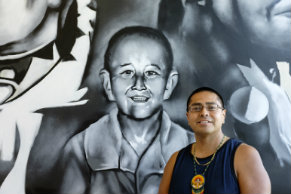 The idea for the art project sprang from conversations among those at the center of Seattle University's Indigenous Initiative. Along with Roberts, Pat Twohy, S.J., Tricia Trainer, '01, and her husband, Trustee Steve Trainer, wanted to increase the visibility of Native Americans.

"It's part of a larger vision we have for our initiative…that honors the Native presence and voice here at Seattle University," says Father Twohy, who has spent more than four decades with Northwest Native peoples. "We'd love to have a university that welcomes Native students and affirms who they are."

The Trainers turned to Morrison (above), a Seattle-based Native American artist, to commission the work as a gift to Seattle U. Roberts, Morrison and Tricia walked the campus before choosing the walls of the dining area as their canvas. The murals were officially unveiled in early August.

"I wasn't prepared for the power of it," says Twohy, of seeing the murals. "They knocked me backwards. They're so strong. I'm going to go back and sit there because I feel like I know everyone in the paintings."

The three murals, each 14 feet wide and up to 17 feet tall, represent different eras in the region's Native American story: the early history of Native Americans in the Northwest, a more recent history and the future.

Morrison painted them in the afternoons and evenings, watching the portraits respond to the changing light. The Seattle-born Apache/Haida Native said the completed works filled him with "tremendous optimism."

Organizers say bringing the murals from concept to completion was collaborative process-even the group decision about which portraits to feature. They also credit the university, particularly Tom Lucas, S.J., rector and curator, and Lara Branigan and her facilities team, with quickly facilitating the project.

"This art has such a strength and message for the betterment of all people," says Tricia Trainer. "I think people will want to be around them and see their strength and carry it forward."

Honoring past, present and future

Andrew Morrison’s murals represent key Native American figures that are integral to the history of the region and the Northwest. Represented in the murals are leaders from the historic and recent past as well as a look to the future.

Chief Seattle (1780-1866) and his daughter Princess Angeline were selected to represent more than 12,000 years of Northwest Native American history in the first mural. The Duwamish chief known as a peacemaker forged harmonious relationships with white settlers and converted to Catholicism. Memorialized by the city that bears his name, he is remembered for his famous speech calling for ecological responsibility and Native American land rights. Chief Seattle’s first of seven children, Princess Angeline (1810-1896), was the last of his descendants to survive. Angeline was beloved by the people of Seattle where she lived in a waterfront cabin on Western Avenue between Pike and Pine streets after refusing to relocate to a reservation.

Billy Frank, Jr. (1931-2014) and Vi Hilbert (1918-2008) are depicted in the second mural. Frank, a member of the Nisqually tribe, was a treaty rights activist arrested more than 50 times in two decades as he battled for the fishing rights of Native people. In 1974, the courts authorized Western Washington’s tribes as co-managers of the state’s salmon resources and reaffirmed tribal rights to a share of harvested salmon.

Hilbert, an Upper Skagit tribal member, is credited with preserving language and culture. As a teacher, storyteller, researcher and writer, she devoted decades to revitalizing and preserving Lushootseed before the oral language was lost forever. In 1989, she was honored as a Washington State Living Treasure.

The third mural looks to the future through images of three Native Americans for whom ancestral culture and modern life coexist—two adults adorned in traditional regalia for a modern-day pow-wow celebration flank a young boy in a collared shirt. The boy selected for the mural is the artist’s 6-year-old nephew, Sinai Morrison, an honor that is not lost on the older Morrison. “It’s beautiful to think about my brother’s son surrounded by these great leaders.”