The Jesuit Father General Adolfo Nicolás has appointed Tom Lucas, S.J., art historian at the University of San Francisco, as the new rector of the Arrupe Jesuit Community at Seattle University. 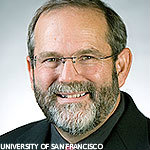 Father Lucas, left, will be formally installed as new rector at 12:30 p.m. on Wednesday, July 31, at the Chapel of St. Ignatius, as part of the university's celebration of the Feast of St. Ignatius. Lucas will deliver the homily and Pat Howell, S.J.,  who is finishing his term as rector, will preside.

Earlier in the morning SU's Jesuit community will host a continental breakfast at the Arrupe Jesuit Residence, 8:30 - 10:00 a.m.  Father Howell encourages faculty and staff to attend one or both of the events "to celebrate the feast day of St. Ignatius and our own terrific tradition of Jesuit higher education at Seattle University."

Howell will take a sabbatical this coming year and plans to spend the first three months of it on the staff of America, the well-known, national Jesuit magazine exploring religion, culture and politics.  He will be living at the America house headquarters in midtown Manhattan.

The appointment of a California Jesuit as rector at Seattle University, Howell said, is part of a transition to a new West Coast province, which will occur in 2017. "The Jesuits of the Northwest are currently in the process of discerning the new provincial for the Oregon Province to replace Pat Lee, S.J., who will finish his term in 2014. Whoever is named the next Oregon provincial will become the West Coast provincial three years later."

The new West Coast province will cover a geographic area from the Mexican border to Point Barrow, Alaska, and from the Pacific Ocean to the North Dakota, Colorado and New Mexico borders. As Howell pointed out, the Oregon and California provinces were actually united until 1932 when the north-south split occurred.

The leaderships of the five Jesuit universities (Loyola Marymount University, University of San Francisco, Santa Clara University, Gonzaga University, and SU) on the West Coast have already been meeting annually over the last two years to explore all the possibilities for apostolic collaboration within the boundaries of the new province.