Earl Lancaster has been cutting hair at the corner of 23rd Ave. and East Union St. since he was a teenager. Often dubbed the "Mayor of 23rd and Union," he's a fixture in a neighborhood that's primed for big changes.

Earl's Cuts & Styles is more than a place to get a haircut. Some customers consider it a meeting spot and pop by to play chess, check out a sports score on the TV or catch up with neighborhood goings-on. Lancaster's renowned for attracting big-name athletes as customers over the years. Cameron Dollar, Seattle University's men's basketball coach, is a regular along with basketball pro Taylor Mays and football pro Martell Webster. The walls of the barbershop are filled with framed jerseys from several high-profile clients, including other local basketball and football greats Gary Payton, Brandon Roy, Jamal Crawford, Jason Terry and more. Some Saturdays, the line for a haircut is out the door. 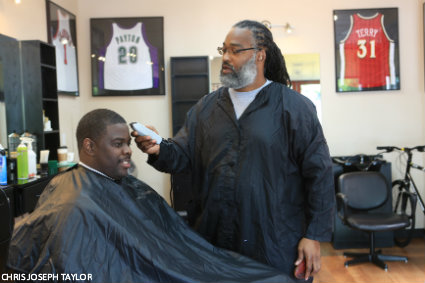 Lancaster doesn't want his barbershop to lose its distinctive character and neighborhood vibe. He's not alone. Merchants and residents in this Central District neighborhood recognize that revitalization is well on its way. In a vacant lot on the southwest corner of 23rd and Union, construction is expected to begin this month on a six-story, 92-unit apartment building with 4,000 square feet of retail space.

Right across the street, community members speculate on the fate of a fountain created by the late African American sculptor and painter James Washington, who often described his art as a spiritual undertaking. Today, the respected artist's home and studio in this neighborhood is a designated Seattle landmark. Residents also are eager to know if they'll be able to coax Helen Coleman, who operated a popular soul food restaurant here, out of retirement and back into business with help from her family and friends.

As the contours of change continue to give rise to new issues, Seattle University's student-run club Enactus (formerly Students in Free Enterprise, or SIFE) enters the picture with its small business consulting services to help with what's ahead for 23rd and Union.

Enactus began by coordinating an initiative last spring using the activities of undergraduate and graduate management classes in the Albers School of Business and Economics. The goal is to give community leaders and businesses the tools and strategies to help in the evolution of their neighborhood. Called "Union Street 98122," the initiative's vision is a thriving and sustainable multicultural neighborhood.

A big part of the initiative is the Union Street Business Association (USBA), a neighborhood-based nonprofit leadership organization established with help from SU MBA students.  The USBA

encompasses both residents and merchants and is designed to become the driving force for a diverse neighborhood. A website that brands the area with a distinct identity is in the making as are workshops and other consultation services. The USBA also is exploring grant, investment and loan possibilities to acquire neighborhood property and local ownership through a land trust or cooperative.

Enactus President Timothy O'Reilly is pleased with the wide participation in the Enactus project. "Engaging our university in the neighborhood benefits students, faculty and community members alike," he says.

Robert Spencer, adjunct management faculty, is gratified by the work of a student team from his spring quarter MBA course called New Ventures Consulting. That team was tasked with engaging the community in the revitalization effort.

"There couldn't be a better example of the stewardship capabilities of our students," says Spencer. "They have the ability to apply their knowledge in ways that help people in this neighborhood get a voice and sort out their destiny. Profound issues are at stake here-people's homes and at times even their sense of heritage. Yet our students are helping the community find its own way, not showing them their way."

SU MBA students continue to be instrumental in helping the neighborhood develop its vision and assisting with the progress of the USBA. Undergraduate students are hammering out business plans for some of the existing 23rd and Union merchants so the impact of higher rents in a new development won't force them to leave.

Earl's is among them.

"Change is good. There are going to be more people around here," says Lancaster as he trims a bank manager's hair and nods in the direction of traffic out the window. Even now, an estimated 30,000 vehicles pass through the intersection of 23rd and Union each week.

Lancaster hopes any redevelopment will include an opportunity to return to this corner.

"As long as I've been here, I know everybody. I'd be willing to move to a new location temporarily, but I love this neighborhood and I like this corner," says Lancaster.

In case you missed it, Professor of Management Leo Simpson was recently inducted into the Enactus Hall of Fame. Simpson is faculty adviser of SU’s Enactus chapter.