After six straight years of coming tantalizingly close to the championship round, Seattle Preparatory School broke through and won the 2014 National High School Mock Trial Championship in Madison, Wisc., on May 10. 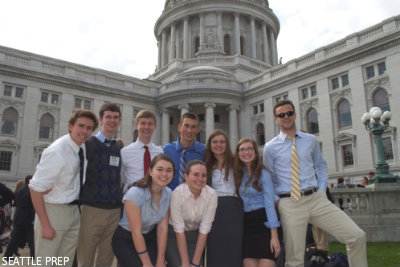 SU's sister Jesuit school won trials against teams from Iowa, Florida, Connecticut and Illinois before defeating a team from South Carolina in the championship. The final trial took place in the majestic Wisconsin Supreme Court room in the State Capitol, with U.S. Magistrate Judge Stephen Crocker presiding and a distinguished panel of attorneys and judges from around the country serving as the "jury" of scorers.

Prep sophomore Elizabeth Shields was one of 10 students recognized as an Outstanding Attorney for the overall tournament. The case was a civil suit for wrongful death at a rave party on a hot summer night in the Wisconsin woods. The victim's estate, represented by the team from Prep, claimed that his partner in their energy drink business had poisoned him with a caffeine overdose because he was about to leave their company and take their secret drink formulas to a competitor. The defense argued that the victim's history of medical problems and drug use led to his death.

From the moment the case came out on April 1, students on 46 state championship teams from around the country honed their rhetorical and acting skills as they studied up on cardiology, toxicology, and intellectual property rights to prepare themselves for the competition.