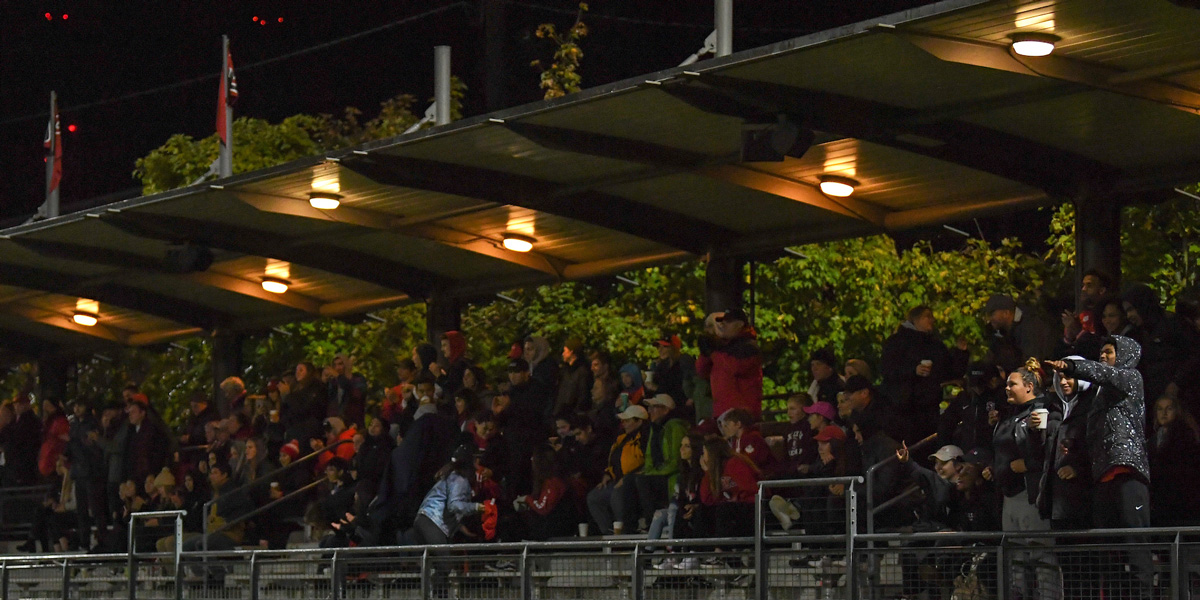 One of the top collegiate soccer venues in the country just got even better. Since its major renovation in 2006, Championship Field has gleamed with brilliance, and now, with the recent addition of lighting, the picture-perfect pitch sparkles long after nightfall.

The newly alighted Championship Field made its debut last night when the men's soccer team took on the crosstown Washington. (The Redhawks competed valiantly but lost, 2-0, to the Huskies, who were ranked third in the nation coming into the match.)

John Meisenbach, '60, a former member of SU's board of trustees and longtime supporter of the university, was instrumental in adding the lights to Championship Field. "John Meisenbach has made a tremendous difference for Seattle U athletics," said Bill Hogan, director of athletics. "With the addition of the soccer field lights, the fifth best college soccer field in the NCAA Division I is even better. John is the primary reason why our soccer future looks bright."

The men will have three more home matches under the lights this season, with the next one coming against UNLV at 7 p.m. this Friday, Oct. 11. The women will play their first night match at home when they take the field at 7 p.m. against Utah Valley on Friday, Oct. 18.

"Adding lights to Championship Field is a tremendous boost to both our programs," head men's soccer coach Peter Fewing said. "It is a great venue for the university and our community, a place where more people can gather and watch top NCAA Division I soccer. For the players on both teams, night games are the most exciting to play. This will help attract top players from around the country."

Originally called the Seattle University East Field, the name was changed to Championship Field after the men's soccer team won the 1997 NAIA National Championship. The 2006 renovation included the addition of permanent, covered seating, a press box and a new scoreboard.

"We are fortunate to have one of the best soccer venues around," said head women's soccer coach Julie Woodward. "The addition of lights is only going to add to the already wonderful atmosphere. Championship Field is a special place to play. Lights are a great way to unite our community and increase our school spirit. It is going to be simply amazing."

The comprehensive lighting system was designed by James Cary Architect and installed by Skanska Building USA, Inc., with Dave Bonewitz of Bonewitz Projects and Steve De Bruhl, senior project manager in Facilities Administration, taking the lead in coordinating the process.

The new lighting joins other recent additions and enhancements at Seattle University, including the Institute for Catholic Thought and Culture's newly dedicated space in the library and Continuing Online and Professional Education's new location in Pigott Pavilion.