SU and UCA colleagues collaborate to share in Ignatian retreats at both institutions.

When it comes to Seattle University's partnership with sister Jesuit school Universidad Centroamericana (UCA) in Managua, Nicaragua, there are many facets and a lot of history. 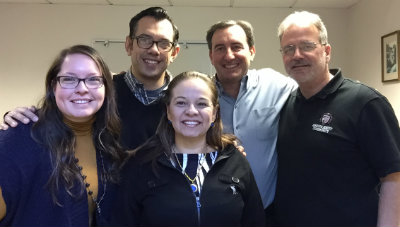 The collaboration took on a new spiritual dimension when representatives of the two institutions teamed up on the SU Ignatian Retreat for faculty and staff last month. Ignacio Lange, S.J., and Patricia Suarez Martinez from UCA's Campus Ministry office visited SU to join the team of SU spiritual directors presenting an Ignatian silent retreat for faculty, staff and alumni Nov. 14-16 at Palisades Retreat House in Federal Way.

Joe Orlando, assistant vice president for Mission and Ministry was part of the retreat team and served as translator (when talking was permitted, of course!). He says SU will reciprocate in March when Pat Kelly, S.J. (Arts & Sciences), and Maria Ochoa (Magis) travel to Nicaragua to serve alongside their UCA colleagues as directors at UCA's annual Ignatian retreat for faculty, staff and students.

"The exchange is part of the SU-UCA cooperation agreement, in this case learning about and sharing in the core mission and identity activities of our respective institutions," says Orlando, referring to the agreement that was formalized between the two schools earlier this year.

Seattle University's partnership with UCA continues to expand in breadth and depth. Various shared initiatives continue to emerge, including the new coffee brand that was unveiled on Nov. 24 as a partnership between SU and UCA. Also last month, Serena Cosgrove, assistant professor in Matteo Ricci College, was named Nicaragua faculty coordinator, a new role that will be central to growing the relationship between the two schools.