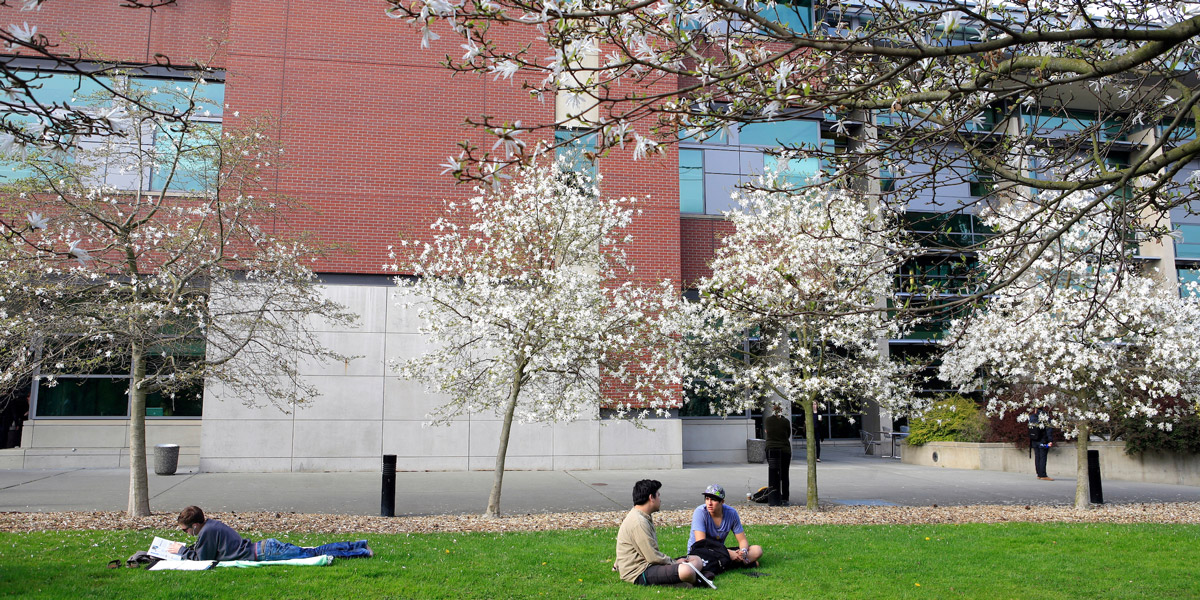 After internships with Sen. Patty Murray (D-Wash.) in the nation's Capitol and then Washington gubernatorial candidate-and now Governor-Jay Inslee in Olympia, Eric Chalmers is prepared for a future that could involve politics.

This Sullivan Scholar from Tempe, Ariz., and president of Student Government at SU (SGSU) focuses squarely on empowering his student constituency to voice their opinions and be themselves without feeling compelled to fit a particular mold.

"I try to gain as much feedback as possible for a more accurate read on student needs," says Chalmers.

What do they want? Student petition initiatives continue to bring key issues forward. Among them are university divestment in fossil fuels, addressing the needs of transgender students, increasing staff for the disabilities services office, engaging our diversity and a tobacco-free campus.

Chalmers says he connects regularly for one-on-ones with SU President Stephen Sundborg, S.J., and represents undergraduates on SU's Board of Trustees.

"Everyone thinks there's a lot more going on this year and more decisions to be made on the future of the university. SU is becoming more competitive. It's a privilege to be part of all that and to really be sure the student voice is plugged in," he says.

There's a new Twitter hashtag where students can call attention to their concerns: #fixitSGSU.

"This meets students where they are," he says.

Chalmers appointed Brandon Moak as the new students with disabilities representative to SGSU . He's also lobbying for more accessibility training. Gender neutral restrooms, much like those now offered at some restaurants, are a way to support transgender student inclusiveness, he says.

He's proud that, proportionate to student population, SU was tops among all independent schools in Washington for both voter registration and voter turnout this year. He credits civic engagement directors Manuel Siguenza and Danielle Ashcraft for leading the effort to register more than 400 student voters. Last year's effort was similarly successful, when 600 new student voters were registered.

How the senior political science major found his way into a leadership role at SU speaks to his strong connection with Jesuit values, dating back to his high school days at Brophy College Prep in Phoenix. Active in the student council there, he took part in an immersion trip to El Salvador and helped plan his school's annual Summit on Human Dignity. He continues to be an ace tennis player at SU and led his high school to two state championships.

Chalmers knew he wanted to continue his education at a Jesuit university and he's pleased he chose SU. Service is a big part of that. As a participant in the International Development Internship Program (IDIP), he spent three months in the southeast of Ghana doing microfinance work with the rural poor.

"I don't know of another program like IDIP in the country," he says. "I was able to truly educate myself more about the world's poor. That gave me a different way of thinking about life and an opportunity to step totally out of my comfort zone. I can't walk through my day without thinking about the day-to-day struggles some people have with putting food on the table. As a result, I feel more authentic and I can really be myself."

He volunteers 1½ hours each week at the King County Juvenile Detention Center where he listens to stories of the incredible journeys of the youngsters incarcerated there. As a result, he toys with going to law school, ideally to become a juvenile public defender.

When he finishes his bachelor's degree, though, he first hopes to gain a little more real-world experience working in Washington, D.C., as a legislative aide in policy development. Public interest law has definitely grabbed his attention as a career.

He likes to describe his experiences as an intern for both Sen. Murray and then-gubernatorial candidate Inslee. As the fall 2012 election approached, Chalmers spent a quarter helping to develop language for Inslee's campaign and took charge of most of the constituent e-mail correspondence, which edged up to 200 e-mails a day.

He isn't likely to forget his summer 2012 internship with Sen. Murray, either.

"I thought I knew a lot about politics. Here I was a 20-year-old, used to being in the quasi-lead role and suddenly I was at the bottom of the heap.  Of the 16 interns, because we're on a quarter system at SU, I was one of the last to arrive in D.C. Other interns had already been assigned to all the big policy areas, with the Department of Defense the most popular.

"That's when I began to think about my Jesuit education and looked for what's missing. Policy goals and implementation don't always line up," he says.

He proposed that he research and write about how those in the military are mistreated. He began to examine possibilities for extending welfare benefits to children in homeless families.

Other interns in Sen. Murray's office took notice. And there's no doubt that's what happens when Eric Chalmers appears on the scene.