Anne Van Ness Farrell is perhaps best known as the former president and CEO of The Seattle Foundation, who grew the once small, regional body into one of the nation's top community foundations. A civic leader of grace and humility, Farrell has achieved much in her storied life and career. At the heart of her impressive accomplishments is a simple tenet that her children and grandchildren lovingly call, "Mother Farrell's words to live by". Asked to elaborate, Farrell waves away the question and modestly sums up the principle that guides her: "Be kind to your fellow man." 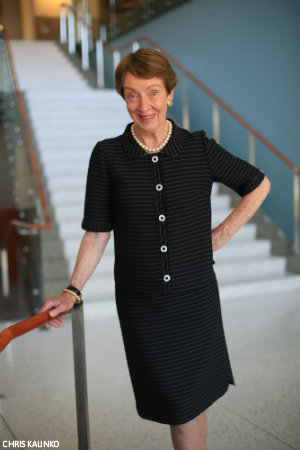 Seattle University is proud to confer its highest, most prestigious honor, the St. Ignatius Medal, to Farrell in recognition of her steadfast commitment to the university and the region. The award, which will be presented at the 32nd annual Gala on Nov. 7, recognizes an individual whose leadership, humility and outstanding service to the community contribute to our vision of a just and humane world.

The meaning behind the medal resonates strongly with Farrell. Choosing her words with care, she says "I'm awed by the importance of it and what it represents-a 'just and humane world.' That's what I want for this world as well."

Farrell's relationship with Seattle University began in the mid-1980s when the university came to the Seattle Foundation to request a grant for street signage. The request posed a conundrum for the foundation, which had a strict policy against funding religious institutions. Ultimately, the foundation was swayed by the value Seattle University brought to its surrounding neighborhood. Signage created a welcoming invitation to a campus that was, in Farrell's recollection, a "mysterious presence" to those outside its borders.

In 1987, Farrell accepted an invitation from President William Sullivan, S.J. to join the Board of Regents and within a few years she became a trustee. Now a lifetime trustee emerita, she co-chaired Seattle University's capital campaign from 2003 to 2009 and oversaw the successful $37 million drive for the Lemieux Library and McGoldrick Learning Commons.

"I take pride in that," she says, relaxing in an armchair in one of the library's reading rooms. "Libraries are fundamental to universities, especially one that is so focused on group study. It's obviously been very successful. The students have embraced it."

When Farrell joined the Board of Regents, it was mostly comprised of men and nearly all its members were Catholic. She jokes that she was then the token Protestant female.

A shared mission and values drove Farrell's involvement with the university. She was drawn to the university's commitment to diversity and inclusiveness, its scholarships for first-generation college students, its belief in the whole student, its integrity and its transformative work in the community.

"The foundational beliefs of the university are similar to my own," she says. "They're in keeping with my own fundamental position. It probably is what attracts me and has me stay (at Seattle U)."

Before she was a respected CEO, Farrell raised her family and volunteered for non-profit organizations including the national Board of the Girls Scouts of the USA. When her children had grown, Farrell decided "there was more to be done" in the world.

She took a development job with Seattle Children's Home and quickly rose in the philanthropic sector to assume the top position at the Seattle Foundation. Some "thoughtful and helpful" men helped her along the way, but she had no women role models. "This was a do-it-yourself project," she says of building her career. "I didn't have a game plan."

In more than 20 years at the helm of the Seattle Foundation, Farrell grew its endowment from $10 million to several hundred million by skillfully guiding the region's newly wealthy to make meaningful connections to the community.

After retiring in 2003, she remained active on corporate and non-profit Boards, including REI, Premera Blue Cross, Washington Mutual Bank, KCTS, Delta Dental of Washington, the university of Washington Foundation Board and Leadership Tomorrow. She helped raise more than $80 million as chair of the Seattle Public Library Foundation and co-founded City Club and the Washington Women's Foundation. Additionally, Farrell was the first woman president of both the Rainier Club and Seattle Rotary Club.

"I've loved every bit of it," she says. "I've never taken a Board job that I didn't feel at least interested in, if not passionate about."

Farrell sees her contribution as "a champion for people who believe in a just and humane world and are in positions to influence the work place and organizations, both public and private."

She has never wavered in her principles nor changed herself to suit others.

"I do what I think is right, whether it's popular or not," she says.

One way Farrell has worked toward equality has been to pave the way for women to follow in her footsteps. She has mentored several women in their careers, advocated for women board leaders and been an unwitting role model for an entire generation. "I didn't know people were watching," she says. "I might have been more nervous if I had."

Kidding aside, she admits to a conscious effort on her part to promote talented women in the boardroom, the community and beyond.

"I have tried to be influential on boards of directors, and I was lucky to be invited to serve on both non-profit and corporate Boards early on. I was always insistent that I not be the only woman and that we find others that would come along behind me. And, I think that's been not only successful because of me but because it works well for the community."

Working alongside President Stephen Sundborg, S.J., as a Seattle University trustee, Farrell says helping Seattle U advance its community service initiatives marked "the beginning of my real passion for this place." Now, as a trustee emerita, she sees tremendous opportunity to capitalize on the university's central, urban location and expand its civic leadership particularly with respect to direct service.

She highlights the Seattle University Youth Initiative as an example of a university- and community-focused project that has transformed "this corner of Seattle" for the better.

"I don't know many universities that have taken on a project of that type of social improvement and activism and done it campus-wide and devoted money, time and human resources to it," she says. "I'm very proud of that."

Looking forward, Farrell sees the university becoming a regional leader with an expanding influence on our changing city.

"Location is a huge virtue to the university, but it has made itself valuable by what it's done in the last 25 years," Farrell says. "Seattle University is important to the fabric of the region."