A program that exemplifies SU's Jesuit mission as well as any turns 25 this year.

SU's Premajor Studies Program has very few peers nationally. "There aren't a whole lot of colleges that have a specific program for students to discern their major, nationally, let alone in the region," says Joelle Pretty, director of Premajor Studies.

And of those programs that do exist, Pretty says SU's is on the more comprehensive end of the spectrum.

About 10 percent of SU's freshman class enter as undeclared, making them the largest group of any incoming students by major. (Students have to decide on a major by the time they earn 90 credits.)

Pretty and the program's two other advisors, Mike Laveson and Cat Aurelio, meet with premajor students during the Summer in Seattle orientation sessions and Welcome Week. Once the academic year begins, students are required to meet with their advisors once a quarter. Then there's the group session in their sophomore year "to make sure they're on track and moving forward in their discernment process." It's around this time, about 60 credits in, that most premajors decide on a major, Pretty says.

A recent study has shown that 75 percent of college students have some level of indecision about their college major as freshmen and 85 percent of students change their major at least once. Something Pretty and her colleagues try to impress upon the students they advise is that indecision can be a blessing, rather than a burden.

"Because students are coming in with a lot of nerves of their own and probably pressure from their parents, they just want an answer right now," she says. "I think our challenge and our talent is to help students step back and calm down. It's a little counterintuitive because they want focus in and we want to wipe the slate clean and start from scratch and literally back up and look at everything. 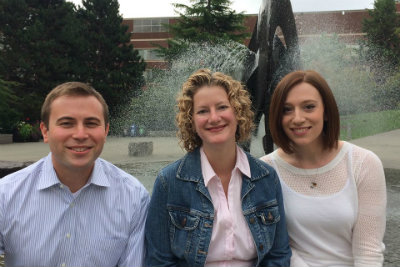 It's a very Jesuit process. "We help students work through a developmental process that helps them intentionally learn about themselves, learn about the majors and career options they have and then go through a decision-making process," says Pretty.

As might be expected, there's really no "typical" premajor student. "We get a lot of really high-achieving students who are so smart and so talented in so many areas that they can't possibly decide," says Pretty. "So it's everything from this honors student who has so many interests to this person who's done a good bit of discernment and is coming in knowing it's going to be one of two majors but needs help determining which and needs to take some classes before making that decision. They're all over the spectrum."

"I would not be where I am today without your help and advising," writes one student to the Premajor Studies staff. "Coming into college without a plan, and being surrounded by people who seem to have it all figured out, was overwhelming to say the least. If I hadn't had the guidance that you provided, there is a good chance I would have probably ended up transferring. For that, I'm forever grateful."

Pretty and her colleagues also work with students who had been in other majors but, for whatever reason, could not continue in those programs, as well as students wanting to double major and needing help mapping that out.

Premajor Studies actually claims a lineage that stretches back much further than 25 years. Its origins can be traced to a program that was created in the 1960s called First Humanities for students who entered without a major. Housed in the College of Arts and Sciences, that program would be renamed General Studies in the '70s. In the mid '90s, General Studies split into Premajor Studies (for undeclared students) and Liberal Studies (for students wanting to major in the humanities or social sciences). In 2005, the Premajor Program became part of what is today known as Student Academic Services.