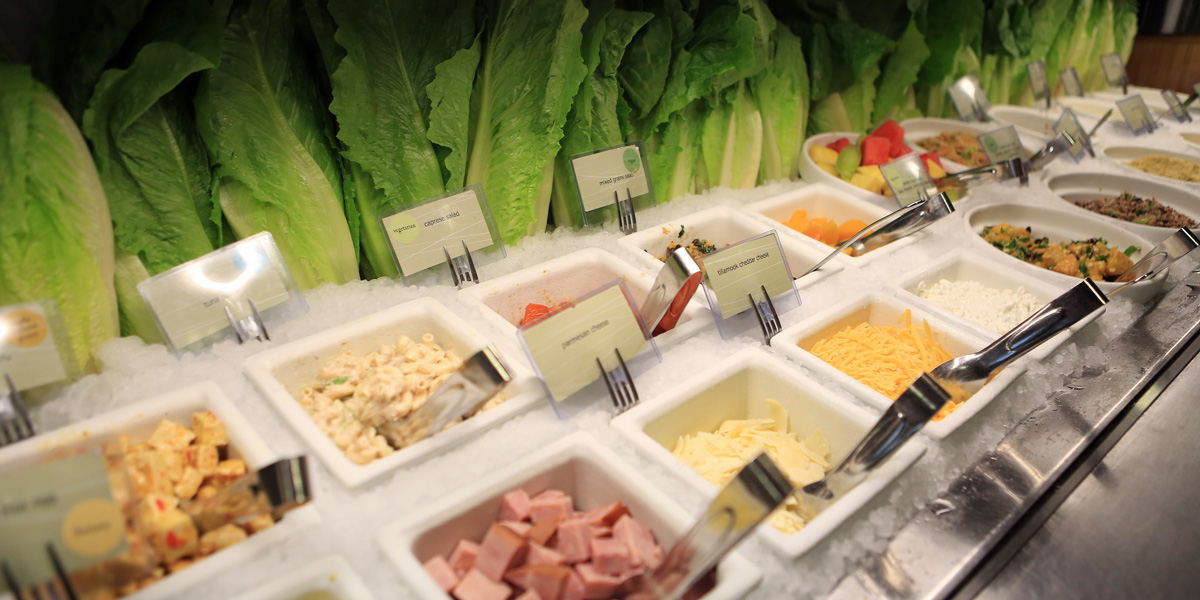 Jay Payne began as general manager of Bon Appétit at Seattle University this fall after Buzz Hofford was promoted to resident district manager. Payne brings several helpings of experience to the role. Spanning more than three decades in the food service industry, he's served as chef, managed food service operations and has even owned a restaurant. Most recently, he was executive chef for Bon Appétit at the Gates Foundation. Here are excerpts from Payne's recent conversation with The Commons.

The Commons: What are your first impressions of SU and how's it different from the previous places you've worked?

Jay Payne: It's great. It's a culmination (of all my previous experiences)-I've managed convenience stores, I've managed espresso bars, I've managed big, busy cafés, I've managed big catering programs-this is the first time I've done it at all at once. So, that's a challenge, but it's a great challenge. After 30-some years in the industry, it's important to keep pushing yourself.

And the team is great. My experience in the last few years has been building things from scratch-openings, new concepts, owning my own restaurant, starting from nothing-and here I'm walking into a system that works. People know what they're doing.

It's been interesting to me because my daughter is 17 and we're touring colleges, and so for me it's hard not to see this world through her eyes. I have a particular affinity for all the new people coming in this year-all the freshmen-and trying to imagine what that must feel like, what a challenge it is to come into this place and everything's new, and trying to figure out where everything is. So I like the idea of being warm, welcoming and hospitable (in helping to create) this new home for a lot of people. Most of the people who come through Bon Appétit live here on campus, so we need to be "Mom."

The Commons: How did you get into the food industry?

Jay Payne: I think I was in sixth grade and, honestly. I was watching cooking shows on television-like the "The Galloping Gourmet," watching what he did and thinking it was just really cool, the way that he put things together. The craft of it was really appealing. And then my father took me to a super fancy restaurant and I saw my first wine steward and I thought that that craft was really cool. And so the service end of it was super appealing to me, as a skill and a craft.

The Commons: What's your favorite item served at Bon Appétit?

Jay Payne: I'm really passionate about authentic international cuisine, and I really like what we do on the rice bowl. I think that the rice bowl concept is really exciting because of the many different directions you can take it. I love the juxtaposition of hot and cold, where you've got kimchi and meat and rice, and salads, pickles-there's so much going on. I love Korean food for that reason.

The Commons: I know that sustainability has factored prominently in your professional life. Can you talk a little bit about that?

Jay Payne: That's also something I've been interested in since I was a kid. I was brought up by hippie parents, organic gardening and composting. So when I got into the food industry I was really drawn to that, and I have worked with local sustainable food since the early '80s. It's always been a passion of mine. I always get excited about closed-loop cycle of food waste compost going to the farm and then back to the table. In the past I've worked with small farms where they're the people who pick up the compost and take it back. I love that lack of waste and efficiency and the beauty of that. I love to work with and serve food that was in the dirt a matter of hours ago.

The Commons: What's the most unusual dish you've prepared?

Jay Payne: When you're talking about really odd things, I think the fried wolf eel head where we ate the wolf eel cheeks was pretty off the scale. One of the challenges for me is to find great ways to make things that accommodate special diets and great ways to make international foods with local ingredients.

One of the things that can be a challenge to prepare are vegan foods that would ordinarily have some sort of fish component-like a fish sauce or an anchovy-sometimes I'll reach to seaweeds and kelps for that sort of flavor profile, to get that kind of briny sea flavor in things. One of the stranger things I've done is make a Caesar salad that, instead of anchovy, has pickled bull kelp. Now, whether or not people like that, that's another story (laughs). I like tinkering like that.

The Commons: Do you have any initial thoughts on some new directions for food service at SU?

Jay Payne: It's still a little too early. To me the challenge is to get a finger on the pulse of what the customer wants, what students want, because I think it's fine for me to have a vision but if that's not what people want, it doesn't make any sense. So we continually need to look at hours of operation, the scope of what the outlets are offering-and try and match (what we offer) to what people are looking for.

I get excited about the Bistro. We've changed the way table service works there, and I think it's really been beneficial to the atmosphere. We would love to take the Bistro and make it something that's more about the students and more about the university in terms of paint, décor and that sort of responsiveness I like to achieve. We've already taken down the pictures of fruit and put up other photographs of athletics (and other aspects of student life). And while we don't want to turn it into some sports bar, we want it to be about the students and about the university.

The Commons: What do you like to do in your spare time?

Jay Payne: My wife and I like to fix up the house and yard-followed by an evening watching "The Universe" or "Fabric of the Cosmos." My daughter and I love to go mushroom hunting, get out in the woods. My (15-year-old) son likes to cook, especially Asian stuff. So one of his favorite things is to explore the Asian markets and look at the crazy stuff we don't understand and try and figure out how to cook it.

The Commons:  Anything else?