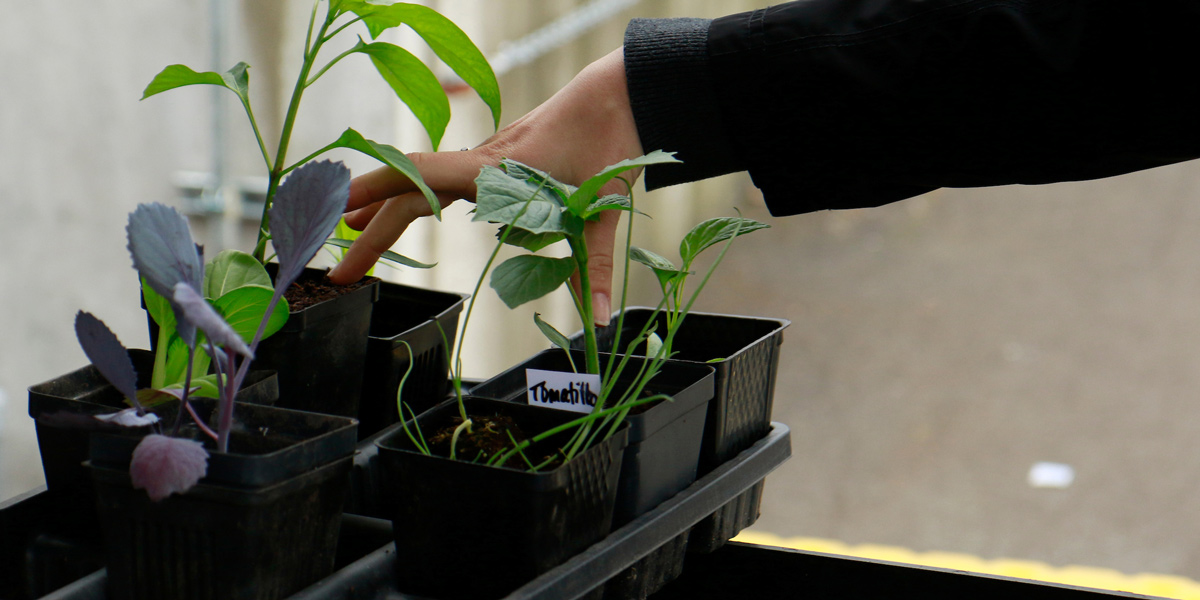 Urban agriculture meets service to others with a new program launched by SU students and staff.

Through spring, summer and fall of 2104 SU students delivered 40 boxes of produce to feed the homeless at St. James Cathedral Kitchen. The students grew the food themselves. Right here in SU's neighborhood.

The effort is part of a new initiative called "Food With Spirit" that Janice Murphy, integrated pest management coordinator, was instrumental in launching. While attending a general meeting of Food And Faith, an interreligious group  hosted by the School of Theology and Ministry in 2013, Murphy was inspired to learn of the various institutions of faith that were growing and serving food to neighbors in need. "I felt we could do more in that direction at Seattle University, that we had the ability to contribute in a meaningful and organized way," she says.

Murphy began talking to some students about growing food to serve those in need. About a dozen joined the effort under the umbrella of the Sustainable Student Action club. With Murphy serving as adviser, the group forged partnerships with the Center for Environmental Justice and Sustainability and Campus Ministry, which helped connect the students to the meal program at St. James.

The idea was to start small. The first batch of vegetables was grown in plots at the Broadway and Chardin Community Gardens on campus in spring and early summer and given to St. James. Meanwhile, Murphy was approached by Photographic Center Northwest on 12 th Ave., which had a small plot of land it was looking to develop into a community garden. It turned out to be a perfect fit. Last June, the participating students readied the space for construction of the four raised beds that would yield the next batch of produce for St. James. They worked with a group called Just Garden and built raised beds for others in the community in addition to their own four beds.

"This is a great example of urban farming and how much food you can grow in such a small space," says Karen Price, campus sustainability manager.

Some of Murphy's colleagues in Grounds have used their community service leave benefit to assist the students. They've also loaned their tools for the effort.

Food With Spirit is receiving support from the Endowed Mission Fund, which in the coming year will fund improvements to the Photographic Northwest Center site, including enhancements such as a tool shed, tools and signage.

Murphy hopes the program will continue to bear fruit-and vegetables, of course. With winter upon us, the students have moved inside SU's greenhouse behind the 1313 Columbia building. They will grow microgreens to be harvested in January, again to be donated to St. James.

Murphy calls the Food With Spirit initiative "a small but very positive action in a complex world. With food security and justice a global issue, one of the cornerstones of sustainability is an investment in urban agriculture. For college-age students, in particular, this is important work. It's a tool for teaching others, a springboard for rethinking broken food systems, and an incubator for inventive ideas about food security for future generations."

The most rewarding part of the project for Chris Johnstone, '15, a participating student, is "seeing people getting excited about growing food. I have heard so many people say, 'Wow, what I put into the ground is actually growing like magic!'"