Finding Joy in Being Available 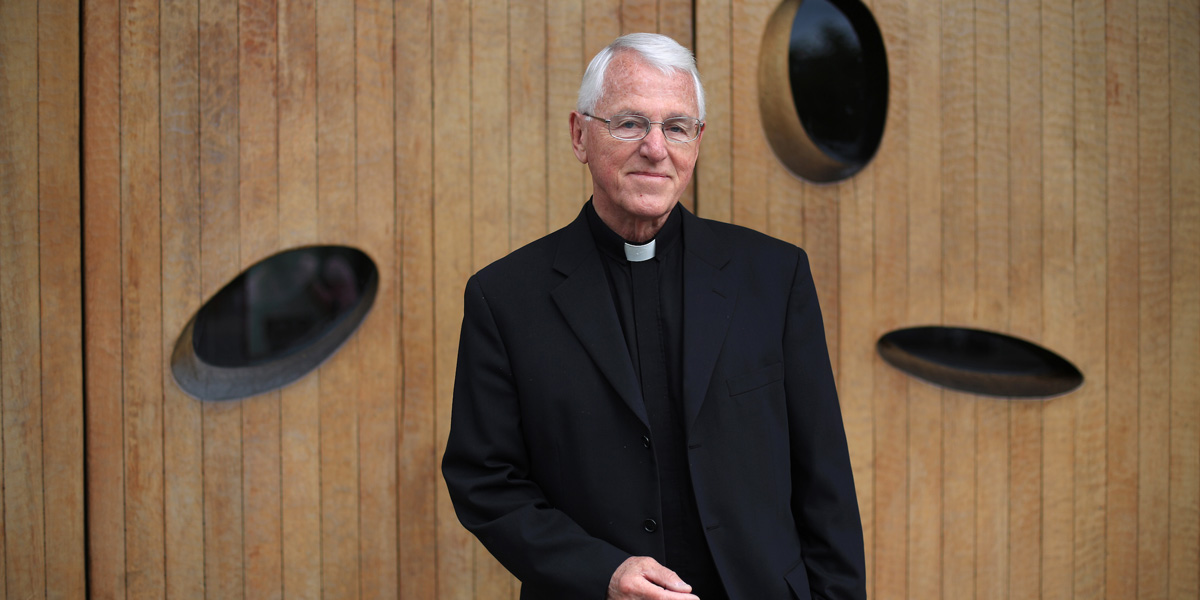 As President Stephen Sundborg, S.J., announced in January, Pat O'Leary, S.J., has been given a new assignment by the Jesuit Provincial and this July will join the Manresa Jesuit Community at Gonzaga Prep and assist in Jesuit ministry in Spokane. Father O'Leary has served a total of nearly 30 years at the university: he taught philosophy and theology from 1963 to 1965 and 1968 to 1970. He returned in 1993 as assistant to the president for mission and ministry. Since 2002, he has served as chaplain for faculty and staff.

Father O'Leary's influence has gone far beyond SU. Among other ministries, he has been active in the Spiritual Exercises in Everyday Life (SEEL) program and the Ignatian Spirituality Center at St. Joseph parish. In 2012 Father O'Leary received the St. Ignatius Medal, a recognition given to leaders who serve with humility and contribute to SU's vision of a just and humane world.

In announcing Father O'Leary's new assignment, President Sundborg wrote: "I can't think of anyone in our campus community who is more beloved than Pat O'Leary. A person of wisdom and grace, Pat exudes great warmth and joyfully connects with those around him. Anyone finding themselves in the company of Pat is better for it…We will greatly miss having Pat with us on campus as he is such an integral part of our soul as a university."

Following are excerpts from The Commons' recent conversation with Father O'Leary.

Father O'Leary on his new assignment:

I'm 86 years old, I've been here 23 years (in my latest stint) and there's a certain time when you begin to ease off but not feel ready to retire. Also this year, this division (Mission & Ministry) made a real review of itself and is making some changes so it just seemed a good time as the restructuring is bringing a new approach. So it just seemed that the two things just came together-the easing off on my part and the division opening up to new possibilities and new energy.

What unites a Jesuit to the mission of the whole Society (of Jesus) is the grace of being sent. Age, health and energies can be important factors in the discernment process. The decision, of course, involves the Province. The heart of our mission (in the Society of Jesus) is to be sent. So (in coming to this decision) there was an ongoing discernment in terms of health and energy. The province is part of that discernment, as well.

I trust this being sent. I've been asked to do different things by the Society. I've ended up doing things I ordinarily wouldn't have done (on my own initiative) and have been very blessed by the sending. So I feel positive in being sent and it's kind of nice to be sent and missioned at this time in my life not just to assisted living but to help out in ministry.

On what he'll be doing in Spokane:

In the dialogue (with the Provincial) we decided I was still ready to do things and he saw a need in the high school (Gonzaga Prep) so I'm helping to form the community there that consists three priests and three younger Jesuits not yet ordained. So I'll be a member of the Jesuit community and assisting in the life of the community.

I will enjoy going back and working with Peter (Byrne, S.J.)-we're good friends. He's the superior of the Jesuit house there and on the pastoral team at St. Aloysius, the parish church on the Gonzaga University campus. I'll be able to fill in and assist him and respond to apostolic needs in both places. I told Peter that he's getting someone with apostolic experience but who's in his twilight years (laughs).

On where his journey has taken him as a Jesuit:

I came to Seattle University at the time of the Second Vatican Council. I taught here for two years before going to Rome for doctoral studies in systematic theology in the fall of 1965. I was present at the closing ceremony for the Council. It was a time of great change and renewal. The summons of the council to the Church and, therefore, to us as Jesuits was clear and challenging: Go back to your roots; get in touch with your spirituality; and prepare for what's coming.

I came back to Seattle U in 1968 to teach systematic theology. At the conclusion of my second year, I got missioned to be the rector of the house of studies for young Jesuits at Gonzaga University in Spokane. Six years later I became novice director, the initial formation for those entering the Jesuits. This put me in a situation of really focusing on Ignatian spirituality.

Seven years later I was sent with Peter (Byrne) to Seattle, this time to St. Joe's parish on Capitol Hill. Our pastoral vision and our hope was that we could share more fully the Ignatian vision awakened by the summons of the Council, especially in terms of Ignatian discernment.

After two years, in 1986, I was missioned again, this time to Gonzaga University to be the rector of the community. Twenty years after the closure of the Vatican Council and almost 15 years after the commitment of the Jesuits to a "faith focused on justice," I found myself back in a university setting. In a kind of "grass roots" movement, faculty members from various Jesuit universities were beginning to meet with one another. These initiatives culminated in a major gathering of faculty (Jesuits and lay) at Georgetown University in 1989. A transformative dynamic was moving forward. As rector and part-time faculty, I found myself very much involved.

When my time as rector was finished, I wanted to come over to Seattle U (in 1993) to be the assistant to the president and to work in furthering and deepening the Jesuit educational tradition.

On what's been the core of his ministry so far:

The response to a shared sense of vision and mission has been a source of consolation and joy over these many years. The ongoing engagement in the Arrupe Seminar that integrates various perspectives into the Catholic/Jesuit character of the university enriches and unifies our sense of common purpose. Those who have their own personal experience of the Spiritual Exercises (through SEEL or other various adaptations) enrich in important ways the ongoing dialogue and discernment that guides our common mission and strengthens the quality of our ongoing partnership.

On whether we can talk him out of leaving SU:

(Laughs) Not likely! At the heart of a Jesuit's commitment is availability. Of course, this involves dialogue and discernment, a trust in the process but also the responsibility to identify one's own movements and make them a part of the sending while being open to the needs and realities of the larger community. The sending is very important because it is what unites one to the larger shared mission. There is a peace in the sending in knowing that prior initiatives will go forward and be enhanced under the leadership of Joe Orlando, Jen Tilghman-Havens, other colleagues and brother Jesuits. The sending does mean that I am leaving something I really enjoy and will miss. But there is a larger reality-the joy you have of being part of a common mission, a joy in being available within that larger reality.

Celebrate Father O'Leary | Please join other Pat O'Leary fans in thanking him for his service to SU and wishing him well on his new assignment at a gathering at 4 p.m. on Tuesday, May 31, in the LeRoux Room. A brief program will begin at 4:30 p.m. and a blessing book will be available for you to share notes of thanks and celebration.