Written by College of Education 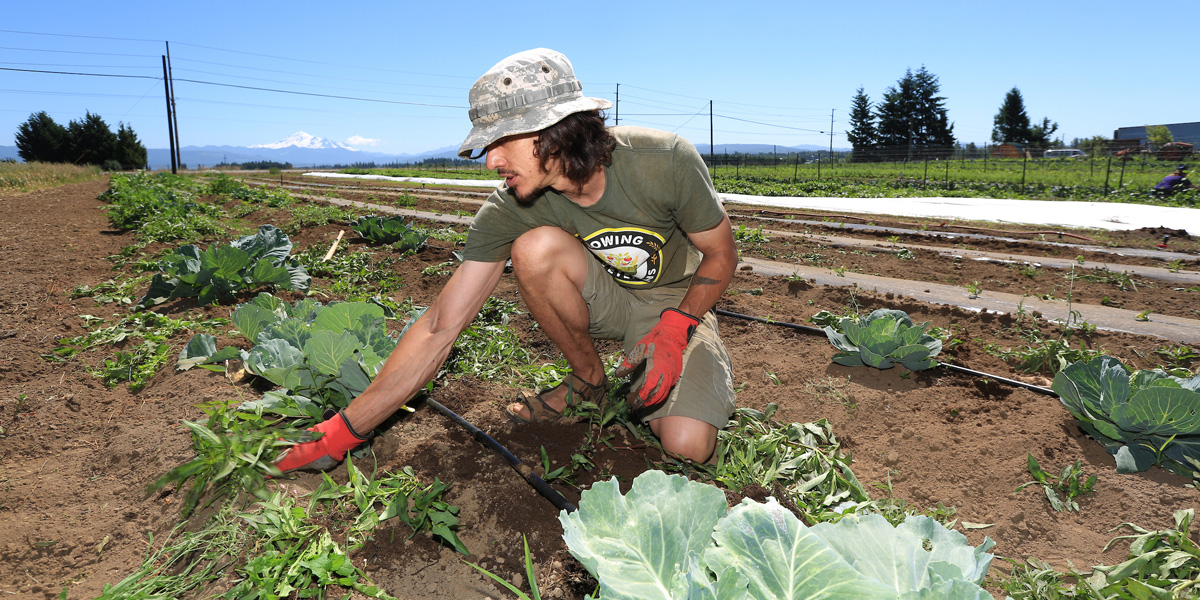 On a small farm near Bellingham, Wash., veterans are growing crops and healing their spirits. College of Education professors Arie Greenleaf and Kevin Roessger are using smartphone technology to examine how farming affects veterans' psychological and social well-being. As the first summer of research comes to an end, preliminary results show dirt therapy can make a difference.

Assistant Professor Arie Greenleaf (Counseling), who served in the Marine Corps Reserves, is concerned with the issues veterans face when they return from combat. Many struggle with PTSD, depression and isolation. But for a variety of reasons, many veterans do not seek or receive traditional therapy.

Through his interest in nature-based counseling, Greenleaf learned about European "care farms" where vulnerable populations do farm work and experience mental and physical healing. "This successful therapeutic model has been well researched in Europe and is mainstreamed there," says Greenleaf.

In the U.S. there are only a handful of care farms. One of them, Growing Veterans, is located a few hours north of Seattle University in Lynden, Wash. Growing Veterans is the three-acre brainchild of Chris Brown, a Marine Corps veteran who served in both Iraq and Afghanistan. The program is a combination of veteran reintegration and sustainable agriculture where veterans of all ages and all wars grow 30 varieties of fruits and vegetables.

"The farm is a catalyst for a lot of positive things," says Brown. These are taking place on the health front, by being outside and being around people. "It's also about being part of something that is greater than yourself," he adds.

Greenleaf says farming acts as a kind of loose group therapy. "The veterans are working with people who have had similar experiences. They're talking. They're farming together. They have the space they need to heal."

Last summer, Greenleaf and his colleague Assistant Professor Kevin Roessger (Adult Education and Training) approached Brown about studying the effect of farming on the veterans' wellbeing. Brown, who is looking for empirical research to confirm the veterans' experiences, was enthusiastic.

The two professors discussed a study design that would measure certain symptoms and emotions the moment the veteran was experiencing those feelings. The challenge appealed to Roessger, who says he is always looking for ways to use technology in research.

"Measuring responses when looking back over time is problematic," Roessger says. "This was a perfect time to use an electronic device to tap into how the vets were feeling in the moment and look at those measurements over a period of time. We decided to use a smartphone app for data collection."

Greenleaf and Roessger chose a single subject study design used in behavioral economics and the pharmaceutical industry. They use a smartphone app from MetricWire to collect data in three areas: depression and PTSD symptoms, sense of wellbeing and social isolation and time spent outdoors.

Preliminary results from the first two veterans with average levels of PTSD and depression who completed the eight-week study show significant improvements in current wellbeing, future wellbeing and loneliness scores. Greenleaf and Roessger are particularly excited about the improvements in loneliness, or social connectedness, which is one of the most important variables for overall wellbeing.

"The fact that the participants are veterans, who as a population have struggled greatly with social isolation and lack of support, means this finding is quite important," says Greenleaf. Participant 717 shows loneliness decreasing 7.6 percent from the baseline numbers reported before working at Growing Veterans, while Participant 295 shows an 23 percent drop in loneliness after eight weeks of working at the care farm.

This data will help as the professors apply for grants to fund a wider study. And it will also give Brown the information he needs to help more veterans experience the potential healing of care farms.