By Joe Phillips, dean of the Albers School of Business and Economics

Earlier this month, I traveled to Rome for a board meeting of the International Association of Jesuit Business Schools (IAJBS). The meeting took place in the Jesuit Curia, which is very near the Vatican. The Curia is a series of buildings containing offices, residences and meeting rooms, something like a very crowded college campus (not a lot of open space). Although not in the boundaries of Vatican City, the Curia is considered part of the Vatican from a legal standpoint and not part of Italy. 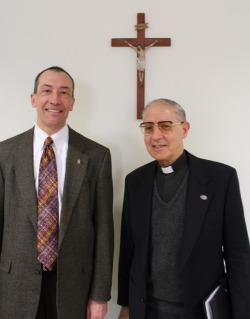 Most of the IAJBS board consists of business school deans from around the world. In addition to board members from the U.S. like me, members came from Belgium, Spain, India, the Philippines and Korea.

The meetings took place March 8-9. The highlight was our visit with Superior General Adolfo Nicolas. I was very impressed with the Father General. He has a very self-deprecating sense of humor and seems very humble. He was amused that everyone wanted a picture with him and maybe even puzzled by it. The purpose of the meeting was to familiarize him with IAJBS and to learn how IAJBS could assist the work of the worldwide Jesuit order.

The Father General emphasized the important role of business schools at Jesuit universities, noting that business "has more attraction" than philosophy and theology. He noted that business without ethics leads to "disaster," and said that due to recent events the world is now more open to an ethical approach to business. He would like to see the Jesuit business schools lead the way in thinking about business in a different way, one that is more holistic and dedicated to the common good.

The rest of the meeting was taken up with planning for the IAJBS conference in Barcelona in July, reviewing the finances of the organization and discussing the relationship between IAJBS and Colleagues in Jesuit Business Education (CJBE). CJBE has historically been a U.S.-centric organization, but the plan is to become an organization to serve business faculty at Jesuit schools around the world.

We also were updated on plans to establish Jesuit business schools in Africa. Projects in Kenya, Rwanda/Burundi, Ivory Coast, the Congo, Burkina Faso and a new one in Nigeria are all at different stages of planning. The hope is that IAJBS schools in other parts of the world will assist with this initiative. It does not seem like much progress has been made in this effort, and at this point there is not an obvious way that the Albers School can assist. We will continue to monitor how this develops and how we might contribute.