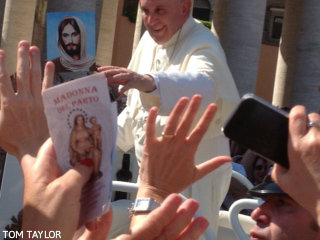 Two of our colleagues have contributed pieces for the latest Conversations on Jesuit Higher Education, which is now available online and will soon be delivered to all SU faculty and staff. The Fall 2014 edition is titled "Mission Integration: With Pope Francis and Catholicism Today."

Our very own Pat Howell, S.J. , of the School of Theology and Ministry has written the lead essay, "The People's Pope." In it, Father Howell examines the first year and a half of Francis's papacy and advises Jesuit colleges and universities "to pursue certain themes that emerge from reflection on (the pope's) life and a deeper discernment of the energies arising from God's presence in his life"--he provides seven points to consider. Howell, as you might remember, was a translator of the much-read interview with Pope Francis, "A Big Heart Open to God," that appeared in America, last year.

And Connie Kanter, chief financial officer and vice president of finance and business affairs, contributed "Discerning Finances Through the Lens of Mission," writes about how universities can utilize five-step process of discernment steeped in Ignatian spirituality to make financial decisions.