Coffee with a Conscience 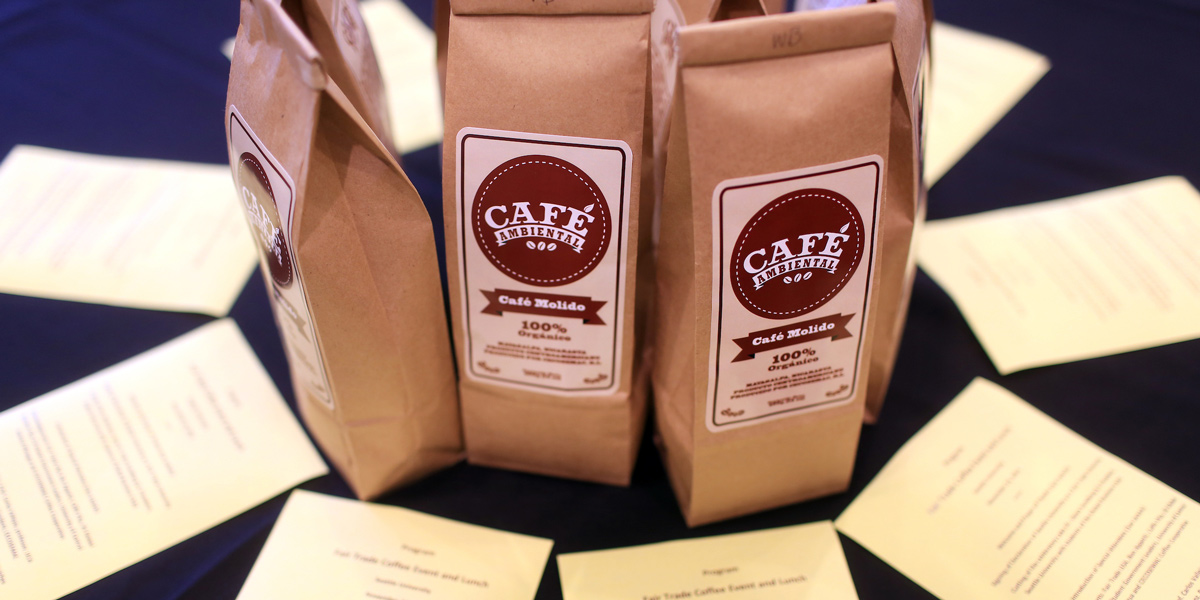 UPDATE (Nov. 25, 12:22 p.m.): After we posted this story, Gary Chamberlain, emeritus professor of theology and religious studies, shared some additional history on SU's commitment to Fair Trade. His comments can be found at the end of the article.

Seattle University has become the first Fair Trade University in the Pacific Northwest and one of only 26 schools in the country to earn that designation by Fair Trade Colleges and Universities USA. The campaign for Fair Trade status culminated in the university's adoption of a Fair Trade resolution as announced at a Nov. 24 campus event, which also featured the unveiling of a new brand of Nicaraguan Fair Trade coffee with samples made available at the event.

The Fair Trade movement supports and advances economic systems that help international farmers, artisans and other workers to lift themselves out of poverty while protecting the environment. "This is so in line with our mission," says Sue Jackels, professor of chemistry, who has been principally involved with the effort. "It's an educational initiative to have Fair Trade products integrated into the university's events and operations." 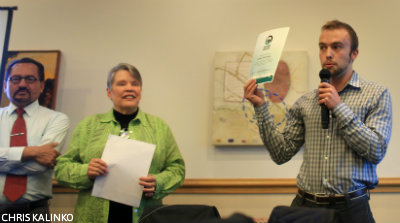 A grant from Fair Trade Colleges and Universities USA supported both the campaign and the new coffee. Here on campus, Jackels and Quan Le, associate professor of economics, worked with students in the SU Global Business Club to move the Fair Trade initiative forward. The resolution was supported by President Stephen Sundborg, S.J., and passed by the Student Government of Seattle University (SGSU) last week.

Before signing the agreement, Father Sundborg spoke of the men and women who are directly impacted by Fair Trade practices. "I came back just last week from El Salvador and I'd been in the spring to Nicaragua, and you only need to be among the people where coffee is grown to realize what a difference Fair Trade means for them and their families, their livelihoods, their futures and their hopes."

Speaking of the need for SU community to be continually educated on Fair Trade issues, the president said, "We're encouraged as a Jesuit university to have a well-educated solidarity."

By signing the agreement, Seattle University pledges to make Fair Trade-certified products available through its dining facilities, catered events, offices and stores. The initiative also includes an educational component that encourages faculty to incorporate Fair Trade issues into their teaching. The university is well-positioned for this, particularly with its food service partner Bon Appétit's strong commitment to Fair Trade.  According to Jackels, "Fair Trade University designation is a great beginning, and it propels us to increase Fair Trade involvement on campus." 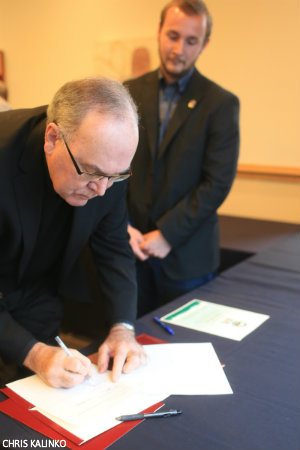 A new brand of coffee

As the Fair Trade resolution underwent its journey toward passage, Jackels collaborated with students and colleagues at the Universidad Centroamericana Managua (UCA Managua), SU's Jesuit sister school and farmers in the Nicaraguan coffee farmer cooperative, CECOSEMAC ("Aroma of Coffee" Union of Multiple-service Cooperatives), to develop the new Fair Trade coffee. Branded Café Ambiental ("Environmental Coffee") the product is sourced from CECOSEMAC, which represents more than 200 farms and 7 cooperatives in the coffee growing region of Matagalpa, Nicaragua. Anier Saenz, the president of CECOSEMAC, and Carlos Vallejos, a professor from UCA Managua, chiefly involved in the project, were featured guests at the Nov. 24 celebration.

The new coffee-100 pounds of it-arrived in Seattle in late October. Getting the product from Nicaragua to campus, Jackels relates, is a story in and of itself. The beans were then roasted, free of charge, by Caffé Vita and complimentary bags of the new brand were distributed at the celebration.

Caffé Vita also hosted the two visitors from Nicaragua during their stay in Seattle to provide guidance on how the product might be improved in order for it to one day gain a better foothold in the market. Jackels hopes that one day the coffee is sold at campus locations.

These most recent initiatives further strengthen SU's collaboration with UCA Managua and continue the longstanding, mission-based work that Jackels and other SU faculty have undertaken for more than ten years with coffee growers and others in Nicaragua. Projects have included coffee wastewater treatment, women's health issues, a wind power generator, and other construction projects for schools and communities in Nicaragua.

And now for some background...

Emeritus Professor of Theology and Religious Studies Gary Chamberlain was kind enough to share the following:

The Coalition worked with a local coffee company which used only fair trade coffee and the food service; the food service used that product in the coffee outlets on campus and in the cafeteria.

Glad to see that early work by Coalition students has paid off.  Also want to see that they are given credit, because in the beginning the whole ideas faced opposition.  The students also worked with the Jesuit community to introduce fair trade coffee.  One Dean (name unmentioned) did not want to use fair trade coffee for staff in that College because it was more expensive than non-fair trade, but the staff convinced the Dean to adopt fair trade. So there has been a real process here.