At Home in the House 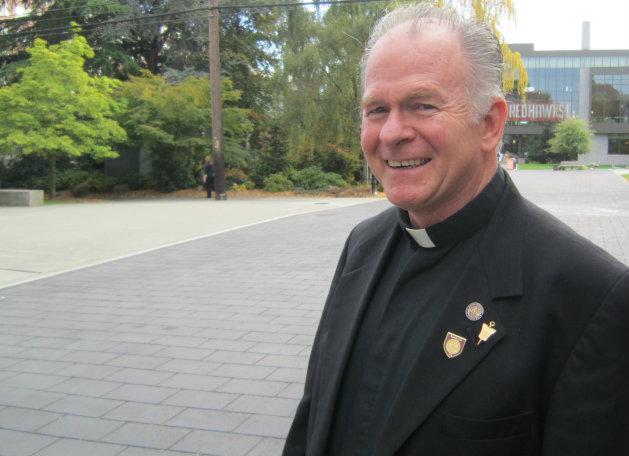 Pat Conroy, S.J., describes what it’s like to be chaplain of the House of Representatives.

Pat Conroy, S.J., became the first Jesuit and just the second Catholic priest to be named chaplain of the House of Representatives in May 2011. Father Conroy’s ties to Seattle University run deep. His father, brother and aunts and uncles graduated from the university, and he served in the Office of Campus Ministry for three years in the 1990s. The Oregon Province Jesuit returned to campus last week to visit with old friends and meet with students, faculty and staff.

Speaking with The Commons about his current role, he said his main responsibility is to give an opening prayer before each session of congress. “Quite frankly, I think that’s the only thing I absolutely have to do.” Of course there are always those “other duties as assigned,” which run the gamut from offering prayers at a variety of ceremonies as well as being a presence at other charitable and social events. Sometimes, he’s pressed into unlikely roles. For instance, when the Minnesota delegation held a hot dish cook-off and one of the judges didn’t show up, Father Conroy stepped in. A big part of the job, he said, is being available to all the congresspersons and staffers who work in the House. “The chaplain is kind of the campus minister of the U.S. Capitol.”

The Commons:  What’s the idea behind having a chaplain in the U.S. House of Representatives?

Father Conroy:  Presumably the people of the United States would want their representatives to be in good health and able to do the best job possible. It’s one small part of this, but one of the services that the chaplain provides is a guarantee of the free exercise of religion by members of the House of Representatives when they are away from home in service to their country. This is actually a constitutional justification for a paid chaplain.

The Commons:  So how did you get the job?

Father Conroy:  I have attempted to be a good and faithful Jesuit my whole life, and I’ve tried to trust as much as I could that my life would be fulfilling and good. I believe that and I believe that’s actually true of every human person who finds God’s will for them. So (the chaplain’s position came open), and the speaker of the House of Representatives (John Boehner), who is a graduate of Xavier University, wanted a Jesuit to be among the candidates. My provincial thought I would be a good candidate and he asked me to apply. I wasn’t even aware the position was available, and had I known, I wouldn’t have gone to my provincial and said, “I need this job.” So when I went to interview with the speaker and Nancy Pelosi, the minority leader, I went with great freedom. I was applying because my provincial asked me to; not because I had to have it. And I don’t believe I got the job because of some accomplishment or because I earned it or because I competed for it. I believe this job came to me by the grace of God.

The Commons:  What do you like most about being chaplain of the U.S. House of Representatives?

Father Conroy: I like the fact—the fact—that I’m the chaplain at this institution, which means there is a possibility that I might be of significant service certainly to the members, but frankly to our nation. Who else has the possibility of being there as history is made and to be able to contribute—however that may be? That’s a fact that blows my mind. I get to be around these people not as a star-struck fan, but a member of their community. I’m an officer in the House of Representatives, and these history-making people are the people in my life right now. That’s just cool.

The Commons:  What is the biggest challenge of the job?

Father Conroy:  The biggest challenge is caring about people who do not appear to care about one another. Now, I am talking appearances here, because they are engaged in a political arena—so publicly they’re doing politics, they’re not building interpersonal relationships. It’s like having your two polite parents rip each other apart in front of you. And that’s hard. It’s hard that this Democrat disagrees vehemently with this Republican, and vice versa. And I like both of them and wish they could get along or at least understand how they’re different but then work together to make something happen. But I have no power to do that and it’s not my responsibility or ministry to do that. But what I witness on a daily basis is very challenging.

The Commons:  Do you think that bipartisanship, assuming it ever existed, has a prayer of returning?

Father Conroy:  Oh yeah, I do.

I think we’re in a period of time in American politics where compromise is a dirty word. Not that it’s ever been easy. But we’re in a time now when no one’s willing to lose anything. I actually believe that every member of congress wishes it were more possible to get things done—I don’t think they like being approved by only 13 percent of the public—but the dynamics as they exist are too overwhelming for any one of them to change that.

But (this partisan reality) is not just in the houses of congress, it’s in the American population, as well. Americans have to understand that when you have a constitutional democracy like we do and people disagree, you have to compromise. It’s not just the congressmen; it’s the voters. As a political reality, we’re not ready to compromise.

The Commons:  Your immediate predecessor was also Roman Catholic priest. Is it safe to say that the Catholics have a stranglehold on the House chaplaincy?

Father Conroy:  (Laughs) Well, I don’t know about that, but one of the House tour guides thinks so. He said to me, “Two Catholics in a row! We’re on a roll baby!”

The Commons:  How long is your term?

Father Conroy:  The chaplain has to be elected every new Congress, so when the 113th Congress begins in January, I’ll be up for election for the first time.

The Commons:  Has anything stood out or surprised you about the experience so far?

Father Conroy:  I’ve been rather impressed by how protective the members of the House of Representatives are of the office of the chaplain. Now, I think there are some who could care less that we have a chaplain, but I think most of them value the fact that there is a chaplain there—not necessarily me, but a chaplain. They value the fact that there is someone in their midst with whom they can talk without having to worry about it being political. I think it’s a very humanizing and comfortable island in a very contentious environment. The very few times I’ve expressed or even come close to expressing an opinion on something, the members themselves have told me they don’t want me to be political. “That’s not why you’re here,” they’ve told me. They are protective of that.

I had one congressman come up to me, he was himself an ordained minister, and he said, “It’s really important that you’re here. It’s important for people to have religious icons—just to know, just to know that religion or God or the spirit or something that is bigger than us is involved.”

The Commons:  I know you play guitar and you’re something of a legend for the sing-alongs you lead. Have you had a chance to share that gift with the members of Congress?

Father Conroy:  I don’t play much anymore. I played a little sing-along at the Republican working retreat last January but they relegated me to a side room—and three members found their way and a few staffers. And they all had a great time and loved it to death, so they said, next year, we’re not putting you in a side room.

The Commons:  I’ve heard your set list reflects that Jesuit principle of accommodation in that you are able to play songs that resonate with whatever demographic is in the room. You were telling me, for instance, about how you learned Jason Mraz and Train songs when you were working at Jesuit High School in Portland and you realized those were the types of artists the students liked. How about for more of an all-ages audience—what are some of your standbys?

Father Conroy:  “Brown Eyed Girl,” “Build Me up, Buttercup,” some Beatles songs and “Pretty Woman”—they have a good energy and most people can sing them. And if they don’t know all the words, they can kind of fake it.