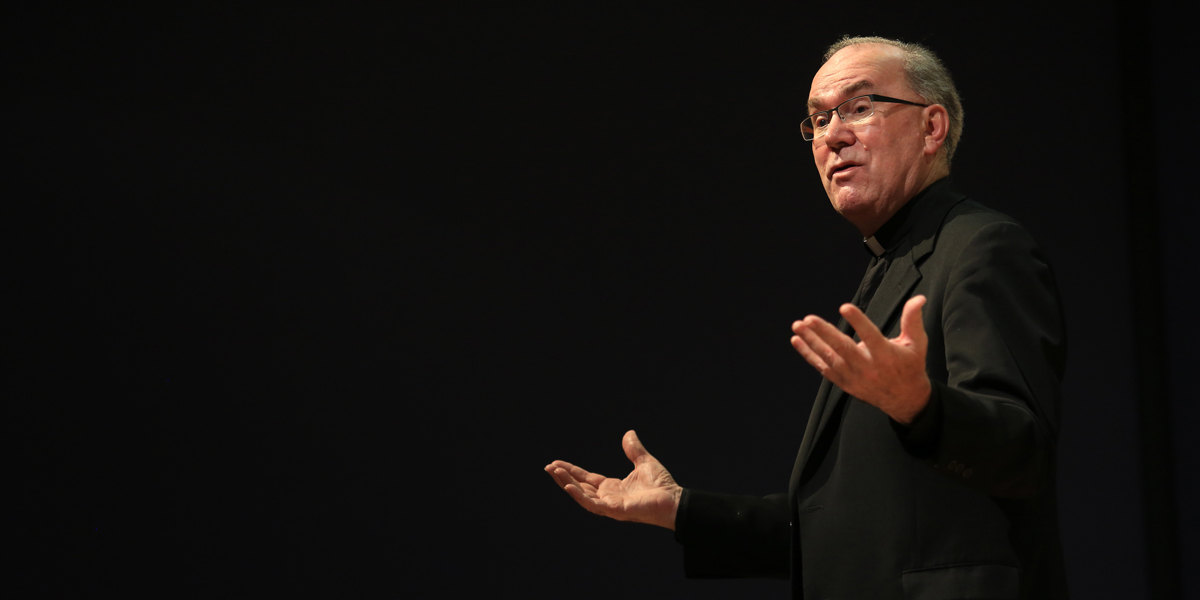 Let  me take you to what I believe is the most sacred place in America.  We begin by standing on the steps of the United States Capitol in Washington, D.C., looking west down the mall.  To the left and the right of us are the halls of Congress where our laws are made, but this is not the most sacred place.  As we walk down the mall, to the right is the National Archives with the Declaration of Independence and the Constitution and to the left is the Museum of the American Indians, but they are not the most sacred places.  As we continue we pass the National Gallery and the Smithsonian holding the treasures of our art and our history, but they are not the most sacred places.  We pass the Washington Monument of the Father of our Country and the White House of our president, but we pass on looking still for the most sacred spot.  So too we walk by the War Memorials of the Second World War and that evocative Wall of Remembrance of the names of the dead of the Vietnam War, more sacred for sure, but not yet the most sacred.  Finally we climb the steps of the Lincoln Memorial to stand humbled beneath the huge statue of Abraham Lincoln, seated serenely, confidently looking out over America with the inscription above him:  "In this temple, as in the hearts of the people for whom he saved the Union, the memory of Abraham Lincoln is enshrined forever." And to either side are the texts of his two greatest speeches-the Gettysburg Address and the Second Inaugural Address.

We have arrived, for here is the most sacred place in America, holding our deepest values embodied in the greatest person of our history, looking out on America's past, present, ­­­­­­­on us, and the future.  Or nearly the most sacred place. For if we turn around and walk a dozen steps backward, we find the marker in the marble floor indicating where Rev. Dr. Martin Luther King stood on August 28, 1963 before the 600,000 people of the "March on Washington for Jobs and Peace" and gave as famous a speech as those of Lincoln, who looked encouraging over his shoulders on that day.

But Martin Luther King was having a problem that day. The speech he was giving from his prepared text was bogging down, going flat, not stirring hearts, and Martin knew it and was beginning to shrivel into himself as he realized he was not matching up to the opportunity.  At that very moment the African American singer, Mahalia Jackson, who had earlier sung to the crowded mass and was standing near him, called out, "Tell 'em about the dream, Martin!"  At that point Martin Luther King completely departed from his prepared text, reached deep within himself, and extemporaneously began, "I have a dream…", repeated nine times "I have a dream", with ever greater force and waves of inspiration.  As we remember, celebrate and recommit ourselves to the dream of Martin Luther King, we remember this, his greatest speech at the most sacred place in America, as the "I have a Dream Speech", even though it appeared nowhere in his prepared text.

Where did that dream come from in him if not from what he had carefully prepared to say?  It came from what was deepest and truest in him, it came from the whole of his life's experiences, above all it came from his faith.  We should remember that his full name was not "Martin Luther King", but "Rev. Dr. Martin Luther King."  "Dr." for his education, but first of all and above all "Rev." from what was primary in his life and before all else; his faith and the fact that he was a minister, a preacher of the Gospel of Jesus Christ.  The dream is nothing other and nothing less than the dream of the Kingdom of God-applied to America-as Jesus preached and lived it for all peoples of all times.

On this weekend of honoring Rev. Dr. Martin Luther King it might be helpful for us to imagine ourselves giving the most important speech of our lives to the greatest crowd from whatever text we had prepared and then in the midst of it being told "tell 'em about your dream!"  When we put down all careful preparation and speak from the heart from what is deepest and truest in us, from the whole of our life experience and from our own faith, what do we say, what is our dream, what are the rolling waves of our inspiration?  We must not separate Martin Luther King from Christian faith, for from that faith came his life, his power, his courage, his dream.  If not for faith there would be no Martin Luther King Day for us to celebrate.

The African-American man who spoke these words was none other than the president of the United States, Barack Obama.

Bias, prejudice, racism is embedded in all of us in America, embedded beneath the level of our minds, our good intentions, our great educations.  It is almost as deeply embedded in us as was the deep place from which the unfulfilled dream of Martin Luther came.  The story of our country this year and in these months shows the discrimination some Americans feel all the time.   When a black friend, a school principal, was asked, "do you experience discrimination?" he responded clearly, "I experience discrimination every single day of my life."

I must confess to you that I am prejudiced, I am racist.  I must also tell you that you are prejudiced, you are racist.  It is of the very nature of all bias that we do not recognize our own.  In our country we take it in without knowing it; it is unfortunately part of being American.

What can we do about this?  When the disciples of Jesus asked him on one occasion, "Why could we not drive out this demon?"  He replied:  "This kind of demon is driven out only by prayer and fasting."  So too is the demon of  our deep-seeded prejudice and discriminative racism driven out by prayer and fasting.  Prayer:  so that we allow God's grace to change us at our core in ways in which we cannot change ourselves.  Fasting:  by fasting from every instance of prejudicial talk or racist incidents of others or ourselves so that we starve the demon in us.  Just try for a lifetime, for instance, one simple resolution:  "I will never tolerate with silence any instance of prejudiced language or jokes, but will gently but firmly speak up and tell the person -regardless of peer pressure-that I do not accept this behavior."  That starves the demon.

Ultimately the most sacred place in America is not at any place at all but is where God encounters us in our deepest reality.  From there comes forth our dreams-as came forth the dream of Martin Luther King-and from there comes forth by prayer and fasting the fulfillment of his dream and ours.