A Church in War

Guest speaker describes the role of the Church, Jesuits in Middle East conflict

Correction (Feb. 4, 2016): As updated below, Campus Ministry was also a sponsor of the event.The Commons apologizes for the unintended omission.

As SU faculty, staff and students learned on Jan. 28, David Nazar, S.J., is as knowledgeable and conversant as anyone on the role of the Catholic Church in countries experiencing conflict. In a wide-ranging talk co-sponsored by the Institute for Catholic Thought and Culture, Campus Ministry, the Department of Theology and Religious Studies and the School of Theology and Ministry, he spoke about the geopolitical realities of the Middle East and how the Church is responding to the current crisis.

In August, Pope Francis named Father Nazar rector of the Pontifical Oriental Institute, the premier center for the study of Eastern Christianity. It is "an important post that can make a very big difference for the Church and society at-large," Associate Professor of Theology and Religious Studies Peter Ely, S.J., said in introducing Father Nazar.

Located in Rome, the Jesuit-run institute draws students from all the Eastern churches-as well as Roman Catholics, Protestants and non-Christians. Many of its graduates return to their home countries to teach in seminaries or universities. Two key functions of the institute, Father Nazar said, are to study the situation of the Eastern churches and to foster a greater understanding of Eastern churches among those in the West. 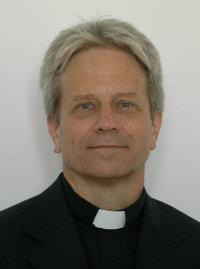 Father Nazar is ideally suited to this bridge-building work. Of Ukrainian origin, he was born and brought up in Canada and has the extraordinary experience of practicing faith in two different Rites, the Byzantine and the Latin, in the Catholic Church.

Among other topics, Father Nazar addressed the factors leading up to the situation in Syria, including impacts from the war in Iraq. He noted the role of outside nations in exacerbating a crisis that the Syrians likely would have resolved on their own with less bloodshed. He described ISIS as substantially made up of mercenaries who are uninterested in building any sort of government. And he addressed misconceptions on refugees posing a threat to national security in the U.S. and other countries.

Father Nazar also spoke about how the Jesuits working in Syria confronted the crisis. At one point they had to decide whether to stay or leave the country. After spending two days in discussion the Jesuits came to a decision: "We stay." Father Nazar says they knew full well the potential risk, and sure enough, not long after one Jesuit was killed and another two were kidnapped.

In the midst of the destruction, Jesuit Refugee Services is on the ground, ministering to the victims of the conflict. "The issue for them is not money," said Father Nazar. "The issue is that roads are being blocked and cities are being starved."

Then, there's those who are fleeing the country. Anywhere from a minimum of five million to close to 10 million (out of a population of 20 million)-have reportedly left. He knows the struggles faced by refugees all too well. Prior to his current appointment, Father Nazar served with the Jesuit Refugee Service in Ukraine. As part of his presentation, he put a face on the refugee crisis by speaking of a family with whom he worked, recounting their struggle to flee Syria for Ukraine and Germany, and describing the difficulties they are still facing in their attempts to reunite.

The crisis in the Middle East has brought a new challenge to the Pontifical Oriental Institute. As the Jesuits in Syria contend with life-or-death issues, they have turned to the institute with a request to help imagine what comes next for Syria. Another role for the institute, said Father Nazar, is to bring a theological perspective to the conflict and help discern what it means "to be a church in war."