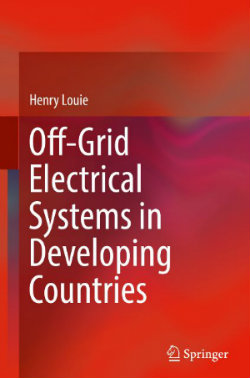 For the better part of a decade, Henry Louie has been working to bring electricity to communities in developing countries that are off the grid. As of this month, the associate professor of electrical and computer engineering is author of a book that will help others do the same.

Published by Springer, Off-Grid Electrical Systems in Developing Countries is described as “…a comprehensive guide to off-grid electrification: from microgrids and energy kiosks to solar home systems and solar lanterns.”

The book “covers engineering aspects of providing electricity to the one billion people who are not connected to the grid, most of whom live in Africa and parts of Asia,” says Louie. “It is written as a textbook for undergraduate students and is also useful as a reference for practicing engineers.”

Louie, who is the current holder of the Fr. Francis J. Wood Research Chair, says he developed the premise for the book during his 2015-2016 sabbatical as a Fulbright Scholar in Zambia. He recognized that while the off-grid industry was growing and universities were expanding courses and programs in the area, there were no textbooks to serve the field. So he decided to fill the void and put pen to paper.

The resulting book includes chapters on energy poverty; minigrid architectures; hydropower; wind power; biomass; solar power; batteries; and more. In other words, subjects on which Louie has amassed considerable knowledge. Over the years, he has deployed several renewable off-grid systems in Zambia and Kenya, projects that he says have been transformative for him personally and the students he has involved in the efforts.

A leader in his field, Louie is president and co-founder of KiloWatts for Humanity, a non-profit organization providing electricity access and business opportunities in sub-Saharan Africa. He serves on the editorial board of the journal Energy for Sustainable Development. The youngest person to serve as a vice president of the IEEE Power and Energy Society, he is a founding member of the IEEE PES Working Group on Sustainable Energy Systems for Developing Communities and is recognized as an IEEE Distinguished Lecturer for his expertise on energy poverty.

About a year and a half in the making, Louie’s textbook “ended up being about 100 pages longer than I planned, and about 100 pages shorter than it could have been. I loved doing the in-depth research on topics that I previously only had a ‘working knowledge’ of. It’s been said that ‘great books aren’t written, they are re-written.’ I couldn’t agree more. There probably isn’t a paragraph in the book that was left untouched after revising and editing.

“I’m very grateful for the thorough reviewing and mentorship given by Paul Neudorfer (emeritus faculty from the Electrical and Computer Engineering Department), and the resources provided by the Father Wood Chair.”

Louie plans to use the book in an elective course next spring. And while it’s a bit early to say, the book could very well find its way onto syllabi at other institutions, too. He’s already had a few professors reach out to him about it. “Right now it is mostly practitioners and researchers buying the book,” he adds.

To learn more about the book, visit Off-Grid Electrical Systems in Developing Countries.