A visit with Fr. Bob Stephan

Bob Stephan, S.J., may not be new to SU this academic year, but the role he took up in July is new to both him and the university. 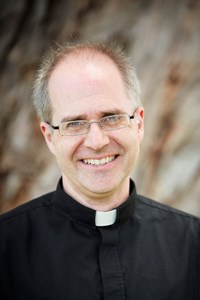 Father Stephan is chaplain for Ignatian leadership, a role in which he serves as a bridge between Magis: Alumni Living the Mission and Campus Ministry and engages with other leadership formation programs on campus.

"Jesuit education is always about formation of people and helping them ask questions of meaning and integration," says Father Stephan. "So particularly with students or young alums, we're focused on helping them discern how they're called. It's a style that's focused not only on people's gifts or talents but also on their deep desires and sense of meaning."

Father Stephan arrived at SU last February to serve as interim campus minister for liturgy. In that role, one of his more unusual duties was to ensure that a group of ducks were safely escorted from the Chapel of St. Ignatius after they waddled in for a visit in the spring.

"They were difficult to get out," he laughs. "They didn't want to leave. I had to call the people from Facilities because anytime I tried to move them, they would fly and hit the window, unfortunately. So together we triangulated and got them out."

Father Stephan's decision to become a Jesuit can be traced to his undergraduate days at Xavier University in his hometown of Cincinnati. Impressed with the Jesuits he had as teachers, he originally planned to become a history professor. In time, he decided to change gears, but his thoughts returned to the Jesuits he got to know at Xavier. "It was a way of being a priest that I could imagine myself doing," he says.

After a period of discernment Father Stephan joined the Society of Jesus. He was ordained two years ago. While he may not be the history professor he once envisioned, Father Stephan still sees himself as an educator and, indeed, part of his ministry at SU is taking place in the classroom. "Teaching and education are very central to how I see myself," says Father Stephan. "The great thing about an institution like Seattle U is that education can happen in many different capacities. I certainly see what I'm doing here as having a teaching component to it."

Before coming to SU Father Stephan was working at the Loyola Institute for Spirituality in Orange County, Calif., where he led retreats, parish missions and served as a spiritual director. This is not his first time living in Seattle. He spent three months here as a Jesuit novice in 2003, working at the L'Arche community on Capitol Hill.

What does he like to do in his free time? "I like to jog-I can't say I'm running anymore," he says with a smile. "I like to hike when I have a chance."