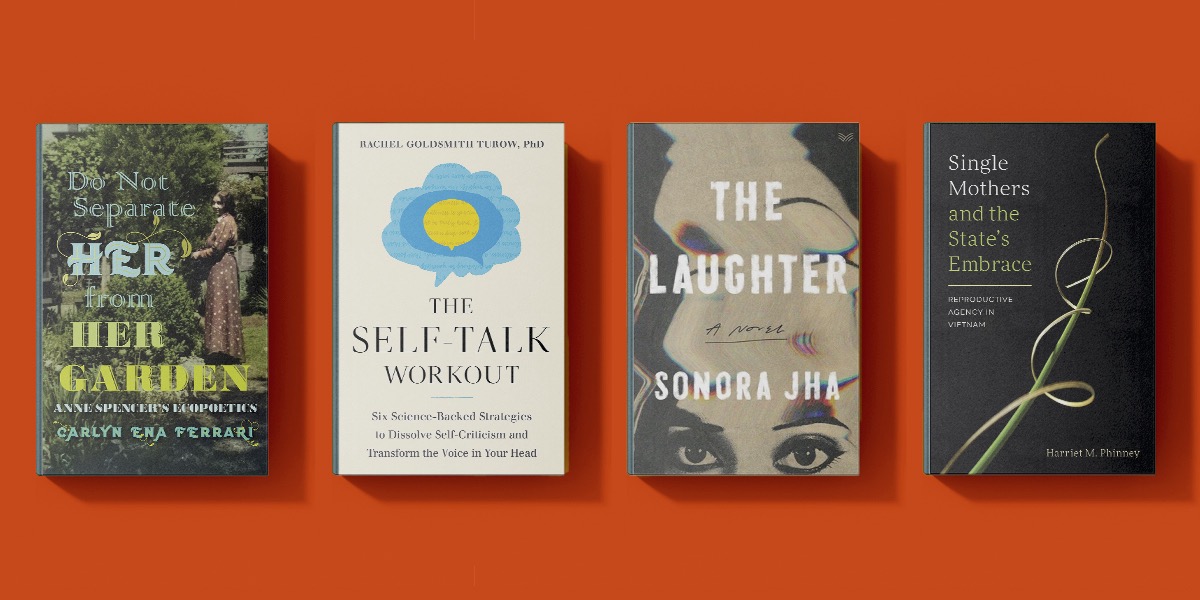 Expand your reading list for 2023 with the latest works by faculty authors.

The New Year for many brings about resolutions or the resurrection of past ones unfulfilled. Why not add reading to the list? And, in the second installment of Good Reads, we present four books by Seattle University faculty worth checking out.

The Self-Talk Workout: Six Science-Backed Strategies to Dissolve Self-Criticism and Transform the Voice in Your Head by Rachel Goldsmith Turow, PhD

Psychology Adjunct Professor Rachel Goldsmith Turow, PhD, knows that many people want to be nicer to themselves. Unfortunately, they may not know how to get there. In The Self-Talk Workout, she offers six different evidence-based techniques to reduce harsh self-criticism and to build new habits of relating to yourself in a friendlier and more encouraging way. The science communicated in this engaging book shows that decreasing harsh self-criticism is indeed achievable and that it can significantly improve mental health and well-being. The Self-Talk Workout just may change how you treat yourself.

“I wrote The Self-Talk Workout after working with hundreds of college students and psychotherapy patients whose excessive self-criticism was damaging their mental health and impeding their academic, professional and personal goals,” explains Turow. “Self-criticism might seem like a minor issue on the surface, but as I dug into the research, I learned that self-criticism is a transdiagnostic risk factor for mental health difficulties, like depression, anxiety, stress, substance use, eating disorders and self-harm.”

Do Not Separate Her from Her Garden by Carlyn E. Ferrari, PhD

Carlyn E. Ferrari, PhD, an assistant professor of English, has written a fascinating book about New Negro Renaissance poet and civil rights activist Anne Spencer. Spencer’s identity as an artist and human being stemmed from her relationship with the natural world and this relationship caused critics to dismiss her poetry for being stereotypically “feminine.” Ferrari challenges this misreading and argues that Spencer uses the natural world in innovative ways to express her Black womanhood, politics and worldview.

Do Not Separate Her from Her Garden is a reminder that Black people are deeply connected to the natural world and always have been. The prevailing misconception is that African-American individuals simply do not have an innate connection to or interest in the natural world because the coercive labor of slavery prohibited them from engaging with nature autonomously. Spencer’s life and work challenge this misconception and invite us to bear witness to what Black writers have to say about the natural world.

“I wrote this book out of sheer admiration and genuine respect for Anne Spencer,” explains Ferrari. “So many Black women writers are overlooked and understudied and I wanted to reintroduce her to the public and do my part to make sure that she is not forgotten.”

The Laughter by Sonora Jha, PhD

An explosive, tense and illuminating work of fiction, The Laughter by Professor of Communication and Media Sonora Jha, PhD, is a fascinating portrait of privilege, radicalization, class and modern academia.

Dr. Oliver Harding, a tenured professor of English, is long settled into the routine of a divorced, aging academic. But his quiet, staid life is upended by his new colleague, Ruhaba Khan, a dynamic Pakistani Muslim law professor. Harding finds himself and his beliefs under fire, even as his past reveals a picture more complicated than it seems.

“The book is drawn from my research on Islamophobia in France and the USA, as well on the intersections of race, gender and power in academia,” explains Jha. “The book is also a social satire situated on an American campus and I chose to tell it in the voice of a white male professor to show his limitation and unreliability in being ‘the authoritative’ voice.”

Professor Jha will be doing an official book launch with her publisher February 15 at Seattle’s Elliot Bay Books. Get Jha's book here.

In the mid-1980s, many single women in Vietnam found themselves without suitable marital prospects due to deaths brough about by the Vietnam War. Many single women embraced motherhood by “xin con”—or, asking for a child.

This ethnography explores the practice of xin con in the postwar era and in Vietnam today and considers the ways women’s reproductive agency was embraced, rather than rejected, by the Vietnamese state as it entered the global market economy.

“I wrote this book because many Vietnamese had encouraged me to research xin con and write about it,” explains Associate Professor of Anthropology Harriet M. Phinney, PhD. “I want readers to comprehend how the war, combined with gendered socialist policies, affected women at the most intimate level—their ability to love, marry and have children.”