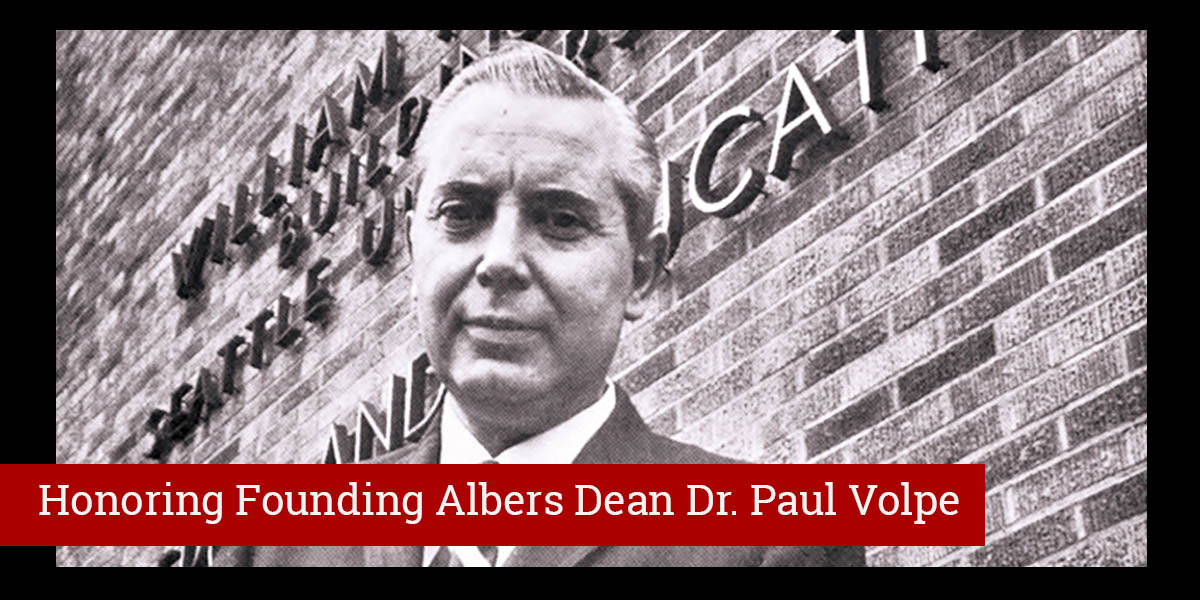 As the business school marks its 75th anniversary with a nod to the future, it celebrates the contributions and achievements of its founding dean, Paul A. Volpe.

It was in 1944 that Paul A. Volpe, PhD, was recruited to teach economics at what was then Seattle College. Three years later, Spring Quarter of 1947, it was announced that the college was establishing a School of Commerce and Finance and Dr. Volpe was named the director—and founding dean—of this new business school.

Dean Volpe laid the foundation and at the time stated, “I know it differs in design and content from most college business schools in the nation. I am convinced that the grand combination of energetic faculty and capable students assures that the new School of Commerce and Finance will go from strength to strength.”

To honor Dr. Volpe—who passed away in 1968—and his legacy at Seattle University, members of the Volpe family, including his daughters Tessie Volpe Van Wagner, ’67, Marian Volpe, ’78, ’00, ’02 ESL, and Virginia Volpe Corrigan, ’72, and son Mark Volpe, ’74, have established a scholarship in their parents’ names (grandson Paul A. Volpe, ’99, and granddaughter Alicia M. Goodwin, ’94, also contributed to the fund.)

The Marie S. and Paul A. Volpe Scholarship is open to all students in recognition of the Volpe family members who are alumni representing various schools and colleges across campus—all seven of their children and five grandchildren are SU grads. The first scholarship will be awarded in fall 2022.

This scholarship serves as a lasting tribute to Marie and Paul in recognition of their sacrifices and hard work to help build Seattle U and the Albers School of Business and Economics into the success it is today.

Here’s more, as shared by Dr. Volpe’s family, about his lasting legacy:

Under Dr. Volpe’s leadership, the Commerce Club got started in 1945 with 45 students—within five years there were 600 members. From the success of this organization, Dr. Volpe began planning the first of many Economic Statesmanship awards. He was pivotal in instituting an award to highlight the contributions of many outstanding business leaders in the country, bringing publicity and prestige to Seattle University. He is quoted as saying, “To educate men and women in character, intellect and professional capacity is the goal of the School of Commerce of Seattle University.”

As dean, Dr. Volpe soon established himself as an innovative leader by reaching out to the emerging Seattle business leaders including Boeing, Paccar, Associated Grocers and other leading corporations in the city.

Throughout her life, and until her death in 2004, Marie Volpe worked to preserve Paul’s memory and all the work he did to build the business school.

Additional tributes to the legacy of Paul A. Volpe at Seattle University are found in the naming of the Dean’s Office Suite in the Albers building, in a collection of historical documents in the university archives, the Volpe Faculty Research Endowed Fellowship for Accounting and the annual Paul A. Volpe award to a senior business graduate with the highest academic performance.

Anyone interested in supporting the Marie and Paul Volpe Scholarship can use this link or contact Heather Williams, director of Gift Planning, at williamh@seattleu.edu or 206-296-6103.