Meet New Board of Trustees Chair 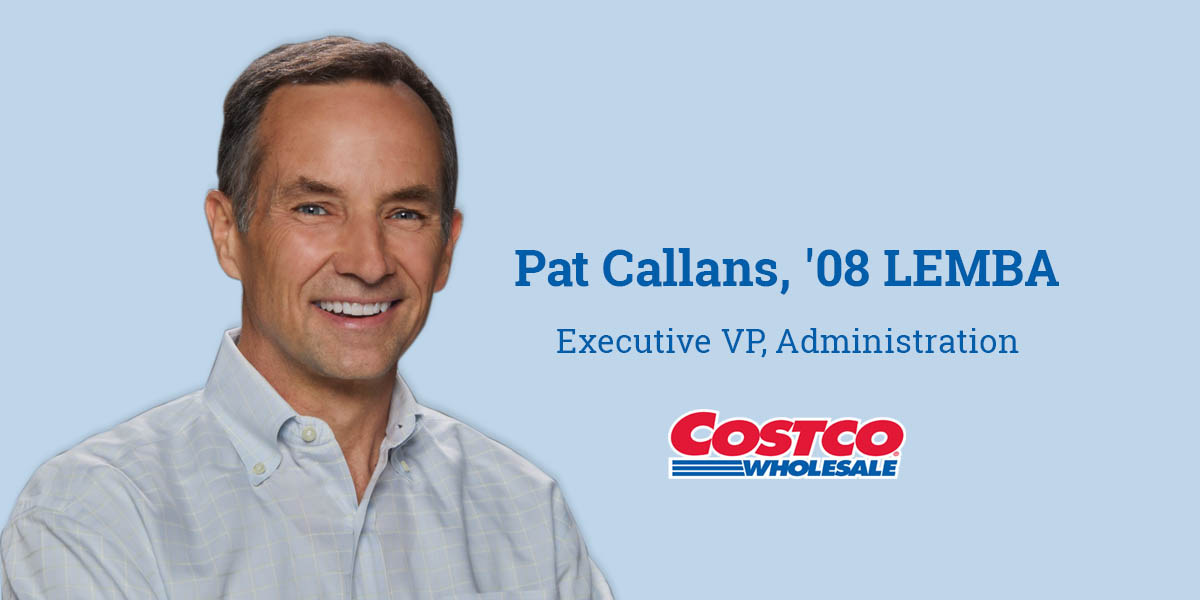 Costco's Pat Callans, an Albers’ graduate, first joined the Board in 2015.

Pat Callans, ’08 LEMBA, steps into the role of chair of Seattle University’s Board of Trustees humbled and with an eye to the future, steered by the university’s reimagined Strategic Directions and grounded in its Jesuit and Catholic mission.

Callans, who is the Executive Vice President–Administration at Costco, discusses in this Q&A the company’s longstanding connection to SU—Costco co-founder and longtime CEO Jim Sinegal once served as Board chair—along with what he sees as the Board’s immediate priorities and how his Albers degree factors into his day-to-day leadership style.

As the new Chair of Seattle University’s Board of Trustees (effective May 1), what do you see as some of the board’s priorities in the coming months?
“The Board’s priorities for the year will of course be guided by SU’s Strategic Directions, with faithful adherence to helping steward the unique and special character of Seattle University. In the coming months, the Board will be working collectively, along with President Eduardo Peñalver, to formalize its priorities for the year.”

You are a graduate of Albers Leadership Executive MBA program. What originally brought you to SU and Albers?
“For over 20 years, Costco employees have participated in SU's Executive Leadership Program (ELP). I was asked to participate in the ELP in 2002 and of course I loved the program, especially the faculty and the campus environment. When the Leadership Executive MBA program was introduced in 2007, I jumped at the chance to return to SU. After completing the LEMBA program, I was invited to join an advisory board for the Center for Leadership Formation in Albers. And, in late 2015, I was asked to join the Board of Trustees, an invitation that I gratefully accepted.”

What are some of the biggest takeaways from the Leadership Program that you apply to your work as Executive Vice President–Administration at Costco?
“I have so many takeaways from the ELP and LEMBA, but an important one for me is that leadership, above all, is about service. Leaders are expected to do many things, but fundamentally leaders are expected to serve and support. This realization has been instructional and inspirational to me during my 28-year career at Costco.”

Costco has long been a supporter of SU, most notably through its founder Jim Sinegal. Can you speak about this connection between Costco and the university?
“Jim, who is Costco’s co-founder and long-time CEO, served on SU's Board of Trustees and chaired the Board as well. Jim also co-founded the Seattle University Youth Initiative and I know he is very proud of his connection to SU. In 2000, Jim and Costco co-founder Jeff Brotman started the Costco Scholarship Fund, which has raised millions of dollars for scholarships for underrepresented students at SU and the University of Washington. Many Costco employees have been exposed to SU by way of the Scholarship Fund.”

On a personal level, what does it mean to be leading the Board of Trustees and your continued connection to Seattle University?
“From my time as a student and my service on the Board of Trustees, I know that SU is a special place, with a strong Catholic and Jesuit foundation, an inspirational mission and truly amazing potential. It’s an exciting time to be associated with the university and I enthusiastically look forward to my service as Board chair.”

Anything else you’d like to add?
“Of course: Go Redhawks!”

Learn more about the Leadership Executive MBA program at Albers.