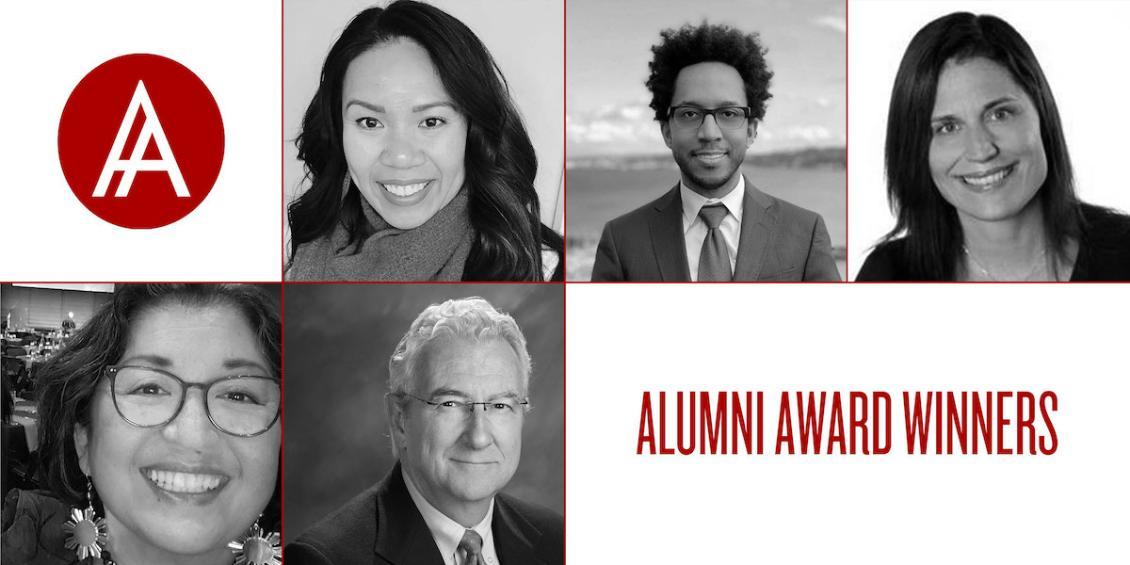 This year’s Alumni Awards Committee had a good problem—an overwhelming outpouring of exceptional nominations for the 36th Annual Alumni Awards. The selection process, led by the Seattle University Alumni Association (SUAA), was filled with much discernment and deliberation and we have our winners!

They are five exceptional individuals who demonstrate inspired leadership, a commitment to service and care, academic excellence, diversity and an alignment with SU’s Jesuit values:

These alumni will be celebrated at the Alumni Awards ceremony on Friday, February 10, at Pigott Atrium and Auditorium. The following vignettes highlight the positive impact these alumni are having in their professions and in their communities and beyond:

Alumna/us of the Year
Ana White, ’95
College of Science and Engineering

Ana White received multiple nominations that touted not only her leadership at F5, but also her ongoing work to support Seattle University.

As the Chief People Officer at F5, White is described as a generous and courageous leader, one who has shown exceptional leadership in spearheading a high-performance, human-first culture.

One of her first projects was to help develop and define the “BeF5 behaviors.” This required working closely with employees, listening deeply and responding with a framework of behaviors that would come to define the company culture.

White’s list of achievements and engagement with SU are no less impressive. She has served on the Center for Science and Innovation Task Force and created a STEM scholarship in her parents’ names (both of her parents are SU alums). Additionally, she has been a key contributor to discussions around diversity, equity and inclusion in STEM.

For these achievements and for embodying the mission and Jesuit values of Seattle University, White receives the SUAA’s highest honor as Alumna of the Year.

To find a person who’s deeply motivated to give back and improve the world around them, look no further than Archie Roundtree, Jr.

After graduating with a doctorate degree from the School of Law, Roundtree focused on a public law career serving underprivileged communities in Los Angeles County at Bet Tzedek Legal Services as an Equal Justice Works Fellow.

His proclivity toward service has manifested in many ways. In his current role at Justice in Aging, Roundtree works to advance equity for low-income older adults while pursuing systemic change in law and policy. Additionally, Roundtree lends his time with underserved communities that have limited access to legal advice. He has long been a mentor to students, guiding them through educational and career choices and advising them on legal and financial literacy. Roundtree has found his voice and continues to speak on local, regional and national platforms.

Roundtree’s multiple nominators depict him as thriving in situations where he has a chance to improve the quality of life around himself. In order to do so, Roundtree believes in striving toward physical, mental, social, and spiritual health; that we can only do our finest work when balance is found.

For having achieved so much in the short years since he graduated, Roundtree is the recipient of the Outstanding Recent Alumnus award.

It’s been said that because of her deep connections with Seattle University, Mary Ann Goto knows everybody in the SU community and that everybody knows her.

Goto frequently volunteers at SU events, participates in fundraisers and is often found connecting with other alumni around campus. Recently, she helped plan her class reunion, bringing in alumni from Hawaii for the celebration. For many years Goto was a key leader of the Filipino Alumni Chapter, helping to lead monthly gatherings, plan community events and historical celebrations and build close ties with the Filipino American National Historical Society.

The desire to serve is embedded in Goto’s character and goes well beyond her volunteer efforts. Professionally, Goto works for Asian Counseling and Referral Services, helping to raise funds for vulnerable members of the community.

For living out Seattle University’s Jesuit values, Goto is the recipient of the University Service award.

As the daughter of immigrants and a first-generation college student, Dr. Rolita Ezeonu’s academic success was made possible in large part by her family, community, and mentors’ generous support and belief in her. Ezeonu is honored to have built a career helping students who come from similar backgrounds. For 25 years she has transformed educational institutions so they can better serve the most marginalized communities.

Throughout her career, Ezeonu has served as a leading administrator for technical and community colleges in South King County. Additionally, she has partnered with local nonprofits to remove barriers of transportation, built relationships with the Muckleshoot Tribe to open stronger pathways into technical and transfer programs and helped secure a $1.5 million grant for Highline College.

In every role, Ezeonu has championed ways to dismantle racism while fostering equity and inclusion.

Having dedicated her career to strengthening educational institutions and the communities that surround them, Ezeonu is well-deserving of the Professional Achievement award.

Tom Roach has deep ties to Seattle University, with 24 family members over three generations, including his mother, Patricia Sullivan Roach, all eight of his siblings and two of his children having attended SU.

For more than 40 years, Roach served as an immigration lawyer, greatly impacting the lives of thousands of Eastern Washington immigrants by helping them navigate the process to gain citizenship status and employment opportunities.

Though he is now retired, Roach has not stopped helping people.

When Russia invaded Ukraine this past spring, Roach was compelled to help. Guided by his values and an intrinsically caring disposition, he traveled to the Balkan countries bordering Ukraine. There, he set out to provide assistance to refugees in whatever way he could. Before long, he was putting in countless hours of volunteer work, preparing bags of food for displaced families.

When Roach learned of Ukrainian children unable to go to school, he jumped into action once again. He reached out to 250 friends and family and, almost overnight, raised enough funds to support two teachers for 51 students.

For his recent good deeds and for a lifetime of serving communities in need, Roach is the recipient of the Community Service award.

Read more about this year’s winners and past award recipients.