Coaching in the Game of Life 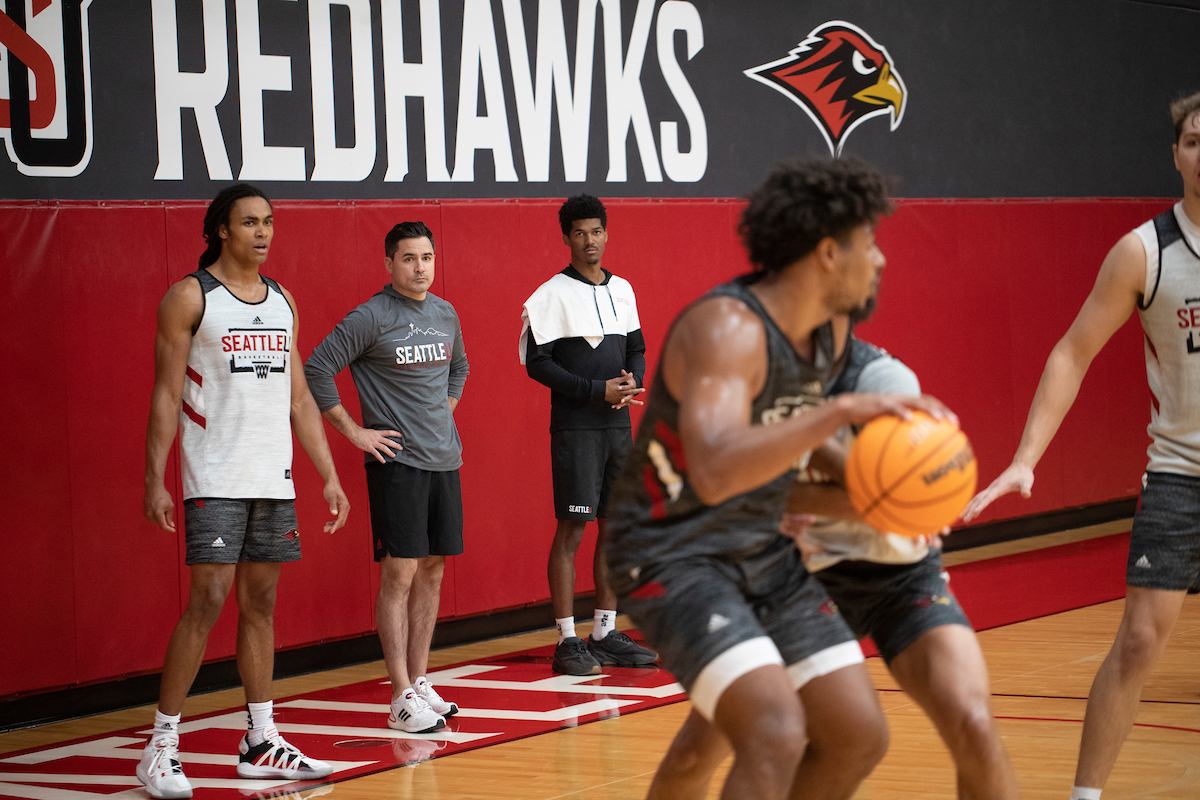 For Chris Victor, leading the men’s basketball team is about more than wins and losses—it’s about preparing players for life outside the game.

As the men’s basketball season is officially underway—with back-to-back home games November 9 and November 13 at Redhawk Center—the reigning WAC champs are looking to continue the momentum following one of its best seasons in decades.

Pivotal to this success has been the leadership of the team, from student-athletes to staff and, of course, head coach Chris Victor. Recently the coach sat down with Seattle University Magazine to discuss the keys to the team’s successful run, how lessons on the court are transferable to life beyond the game and his hopes for the new season.

Four days before the start of the 2021-22 season, Chris Victor learned that he was no longer the associate head coach of Seattle University Men’s Basketball—he would be leading the team as its interim head coach. The short window meant no time to be anxious or rattled as Victor and the team were laser focused on the game.

“With the start of the season so close, we really were able to focus just on basketball,” says Victor, “which helped the team move forward.”

In March, Victor was officially named as the Redhawks’ new head coach after leading the team to one of its best seasons in decades, culminating with a Western Athletic Conference (WAC) title—for the first time ever.

Director of Athletics Shaney Fink praised Victor for his “basketball acumen … matched by his tremendous character.”

“He is a thoughtful, authentic leader who is focused on creating an environment that brings out the best in each member of the team,” says Fink. “Coach Victor is a fierce competitor who will continue to lead Redhawk basketball to new heights.”

The move from interim to permanent coach is something Victor says he is both grateful for and humbled by as he leads the team into the future.

“One of the reasons I am so honored and proud to be the coach here is because of the mission,” he says. “That’s what separates us.”

Prior to Seattle U, Victor served as an assistant coach at Eastern Washington University for two seasons. His first season on the Eagles coaching staff was highlighted by Eastern’s first-ever victory in a national postseason tournament as a member of NCAA Division I, when the Eagles beat Pepperdine, 79-72, in the College Basketball Invitational (CBI). The team went 22-12 that year and returned to the CBI in 2016-17. The following season he arrived at Seattle University as part of the coaching staff led by head coach Jim Hayford.

That first season of 2017-18, the Redhawks finished 20-14 overall, 16-3 on their home court, 8-6 in WAC play and earned a berth in the CBI. The Redhawks returned to the postseason the next year, competing in the CollegeInsider. com Postseason Tournament (CIT). The Redhawks combined for 26 wins over the COVID-shortened 2019-20 and 2020-21 seasons.

Beyond his extensive coaching prowess, Victor was a decorated player at Concordia University, instrumental in helping the team advance to the NAIA championship game in both 2003 and 2004. In the 2003 title game, he scored a season-high 26 points and dished out nine assists as he helped lead Concordia to its first national championship in program history. He also ranks in the Top 10 all-time in points and three-pointers, along with third all-time in assists and steals for the university.

Transformed by his years at Concordia, where he says he “went in as a kid and came out a man,” Victor gained insights, life lessons and connections that he carries with him today and into his coaching style. It’s because of these experiences that he became a coach.

“I played for three years at Concordia and I still, to this day, talk to my coaches and former players, my friends. The biggest life lessons I learned playing are what I try to duplicate in our players. I understand how important the growth and maturity are for these young men and it’s important that the guys we approach to play here go through that transformation. Seeing their growth is rewarding.”

This past season was punctuated with many high points, including an 8-0 start in WAC play for the first time in 10 years competing in the league. And it took the Redhawks just 26 games to reach 20 wins, marking the 15th, 20-win season in program history. Another highlight—the team played many of its home games at Climate Pledge Arena, which Victor calls “the best home arena in the country.”

For the coach, he points out three of his most memorable moments of the past season: “One, our first home game where we won the game at the buzzer. Two, being named head coach and the reaction from the players. And three, winning the WAC Championship and the energy and excitement of the team and the home crowd.”

The 2022-23 season will see many returning players along with some new talent to fill out the roster.

“It’s about getting the right people in the program, both players and staff, that fit our culture,” explains Victor, who leads the recruitment process. “Once we have the people in place, it’s about a commitment to something bigger than themselves.”

And with the pieces in place—and building off the recent success—there is buzz and excited optimism about what’s to come for men’s basketball at Seattle University.

Get in on the action and get your tickets today.

Check out what the Seattle Times is saying about the team and its goal for the season ahead (“After last season’s breakthrough, Seattle U men’s goal is clear: NCAA tournament.”)

Read more stories likes this in the fall/winter 2022-23 edition of Seattle University Magazine.