Theater in the Time of Pandemic: Collaborative Virtual Productions Coming in March 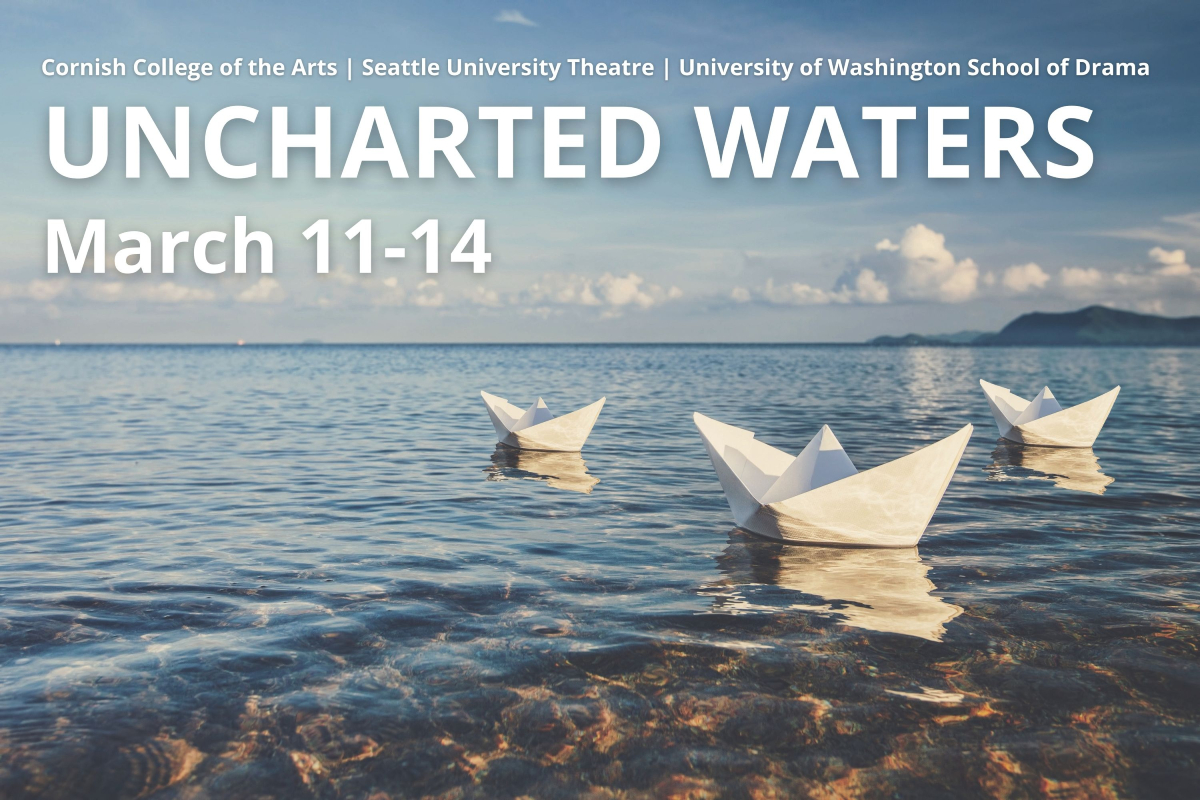 Seattle University Theatre is joining forces with the undergraduate theatre training programs from Cornish College of the Arts and the University of Washington to present Uncharted Waters, a virtual tri-production of two plays: William Shakespeare’s Twelfth Night  and a new devised work, Bodies of Water, responding to the themes of Twelfth Night.

The project came about when three of the programs’ heads—Seattle University’s Rosa Joshi, Cornish’s Richard E.T. White and UW’s Geoff Korf—began meeting informally last spring to swap ideas and provide support to one another as each program attempted to meet the enormous challenges of teaching theatre in a pandemic.

“What really inspires me is that we are not just ‘making do’ in this new virtual realm, we are embracing the challenge and reframing it as an opportunity,” says Joshi, chair of Seattle University’s Performing Arts and Arts Leadership programs. “And I hope that will in turn inspire our students to imagine the possibilities of making art in these challenging times. … In the face of the extreme isolation that COVID has forced upon us, we’re reimagining ways to create community and connection.”

Performances run March 11 through 14. Tickets are free for all students and $5 for general admission and go on sale Feb. 11 through the UW Arts Ticket Office. Details and the link to tickets are available on the Uncharted Waters website.

“There have been these famous examples,” says Korf, executive director of the UW School of Drama, “of great new productions being born out of really difficult, seemingly insurmountable challenges to a theatre company or artist. It’s always stuck with me how ‘big thinking’ in times of extreme challenge can help an artist through. The idea of having our three schools collaborate during this time when so many artists and companies felt forced to shrink or huddle in place, was really born from that spirit of making deep and often very risky commitments to something artistically ambitious. Sometimes, despite the challenge, you get a gut feeling that it’s the right thing...that it’s massive...bigger than any of us know how to handle, but you know it’s the right idea. I think remarkably, Rosa, Richard and I somehow each recognized it together.”

Alumni of the three schools are deeply integrated into the fabric of the regional theatre community, but these programs have never collaborated on a shared production.

The overall project was conceived from the start as two productions—a Shakespeare play and a devised, ensemble-generated work—to maximize student opportunities and offer different-but-complementary learning experiences.

Students will work with their own technology as well as gear provided by the schools. Designers will deliver materials to students’ homes and work remotely with the performers to execute their designs.

Joshi directs Twelfth Night. She is an acclaimed director and adapter and a co-founder of upstart crow collective, a company committed to presenting classical plays with diverse casts of women and non-binary actors. Recently, Joshi directed Bring Down the House, an adaptation of Shakespeare’s Henry VI trilogy, which she co-adapted with Kate Wisniewski and which ran to great acclaim in Seattle in 2017 and again in 2020 at the Oregon Shakespeare Festival.

On the choice of Twelfth Night Joshi that it “seemed to be a perfect vehicle to provide a welcome shot of joy in these socially distanced days as we are all huddled in our homes. This buoyant and poignant comedy about identity and the need to connect makes us think about our basic human need to know each other and ourselves more deeply.”

Bodies of Water is co-directed by Porscha Shaw, an actor and teaching artist who is a graduate of UW’s Professional Actor Training Program, and Sheila Daniels, a faculty member at Cornish College of the Arts. Shaw has been seen recently on Seattle stages as the title character in Saint Joan at ArtsWest, Sweet Thing in Nina Simone: Four Women at Seattle Rep and as Lady Anne in upstart crow collective/Seattle Shakespeare Company’s production of Bring Down the House. Daniels, a five-time nominee and two-time recipient of the Theatre Puget Sound Gregory Award for Outstanding Director, recently directed The Wolves at ACT Theatre, Wild Horses at Intiman Theatre and Indecent at Seattle Rep.

Reflecting on the goals of the devised piece, Bodies of Water co-director Shaw says, “I think ensemble work is important in this time for so many reasons. It creates community when we are in our most isolated state. It promotes vulnerability and provides a space for it despite Zoom and other video platforms seeming far from natural. Most importantly, it gives creative power back to the performer, which theatre has almost lost.”

The Uncharted Waters project will host a virtual symposium on the future of Seattle theatre on Saturday, Feb. 13, from 1:30 to 3:30 p.m. Hosted by Seattle’s Jay O’Leary-Woods, co-artistic director of Sound Theatre Company, the symposium will feature local artists discussing their visions for regional theatre and answer questions about entering the profession. The symposium is free and open to the public (RSVP here.)